Caroline Wozniacki is the new World #1. Three weeks ago, she finally got the Grand Slam Gremlin off her back, capturing the title at the Australian Open. With the victory, she regained the sport’s top position for the first time in five years, and has now held the #1 spot for a combined total of 70-weeks.

2018 has been kind. Week-1 in Auckland, she reached her 51st career Final, and comes into this year’s Qatar Total Open with just two losses: Julia Goerges in Auckland’s championship match and Daria Kasatkina 2-weeks-ago in St. Petersburg’s Quarterfinals.

A Commanding Victory for Caroline

World #52 Carina Witthoeft hasn’t exactly been intimidating opponents this year. Last October, she captured her first career title in Luxembourg, and started the new year ranked inside the WTA’s top-50 for the first time. But after early exits in Brisbane and Sydney, she fell to Caroline Garcia in the opening round of the Australian Open.

The World #1 earned three breaks in both sets Wednesday night, allowing the German only one service hold in just under an hour. It was one-way traffic from ball-up, despite Carina’s one break to level set-1 before the first sit-down.

After winning a pair of qualifying matches over the weekend, World #92 Monica Niculescu upset Maria Sharapova on Monday night. Today, the crafty Romanian outlasted the #14-seed Magdalena Rybarikova, who retired in the deciding set, after capturing set-1 in a grueling tie-break, and falling 2-6 in the second.

Caroline is 8-0 against Niculescu. They last met in Madrid’s 1st-Round last year, where Wozniacki had to battle for the victory, 75 67(3) 64.

Just 3-weeks ago, this 27-year-old won the biggest title of her career, capturing the 2018 Australian Open title. With the victory, she regained the World #1 ranking for the first time in 5-years, and has now held the sport’s top position for a total of 70-weeks. A 3-time Grand Slam Finalist, she started the new year by reaching her 51st career Singles Final in Auckland, and with the win in Melbourne, now owns 28 Singles titles in all. She’s qualified for the WTA Finals 5-times; and last November, captured the year-end championship with wins over four of the sport’s top-5 players. Competing in her 9th Qatar Total Open, from Denmark – Please welcome 2-time Doha Finalist and the #1 Player in the World, Caroline Wozniacki

Yesterday, in her Doha debut, this 22-year-old defeated fellow German Tatjana Maria to reach tonight’s 2nd-Round match. Back in October, she won her first career WTA Singles title in Luxembourg, and ended 2017 ranked inside the top-50 for the first time. She owns 11 ITF Women’s Circuit Singles titles, has reached the 3rd-Round of all four Majors; and earned her first career-win over a top-25 player last June in ‘S-Hertogenbosch, defeating Coco Vandeweghe en-route to the Quarterfinals. Competing in her first Qatar Total Open, from Germany – Please welcome Carina Witthoeft

Mentors…the best have no clue of their influence 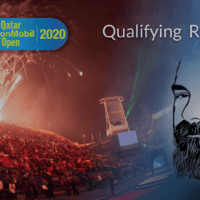