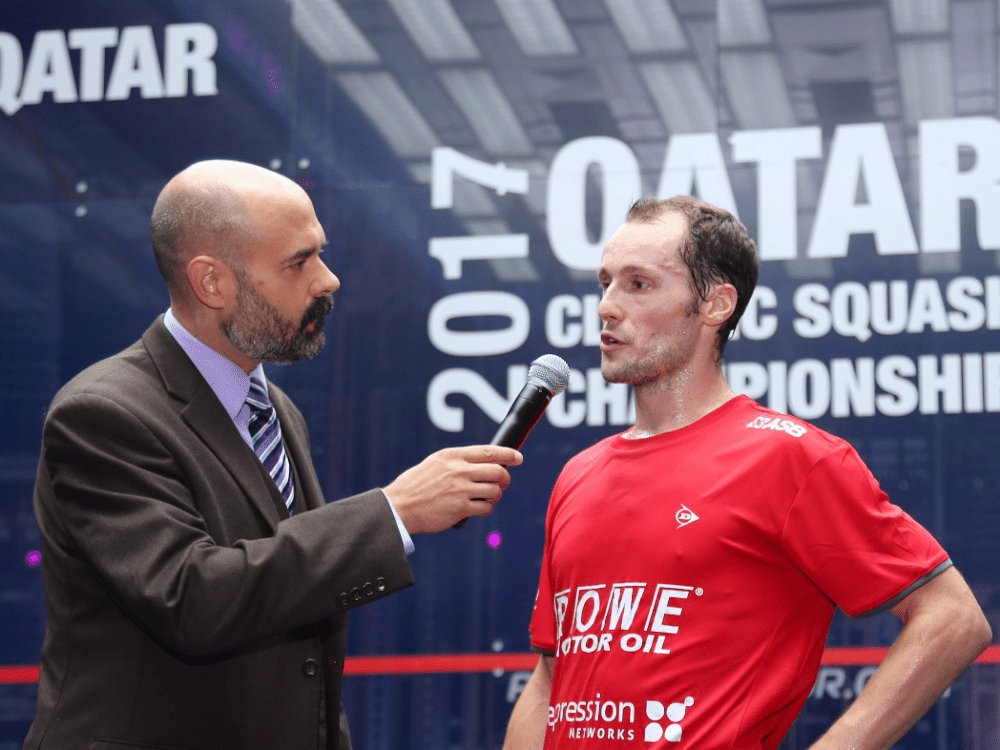 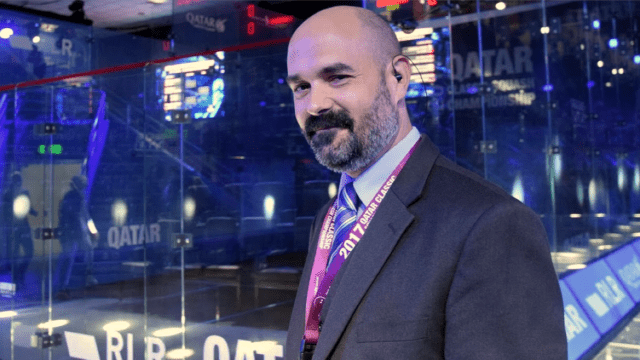 From 2017-2021, announcer Andy Taylor traveled to Doha, Qatar to host the Qatar Classic Squash Championship, one of seven Platinum events on the PSA World Tour.

There, he hosted the official Player’s Dinner, introduced the athletes during player walk-on, interviewed the victors on the glass court for international broadcasters, and hosted the championship trophy presentations.

In 2019, Andy was fortunate enough to host the PSA Mens’ World Championship in Doha – Qatar’s 5th-time hosting the sport’s most prestigious tournament.

Typically, the Qatar Classic is the second Platinum event of the PSA World Tour Season, following the US Open in Philadelphia. Other top-level Platinum events include the Hong Kong Open in China, the Black Ball Squash Open in New Cairo, the Tournament of Champions in Grand Central Terminal NYC, the Windy City Open in Chicago, the El Gouna International Squash Open in Egypt, and the British Open in Hull.

The season culminates with a year-end championship featuring the game’s top-8 players at the PSA World Tour Finals. 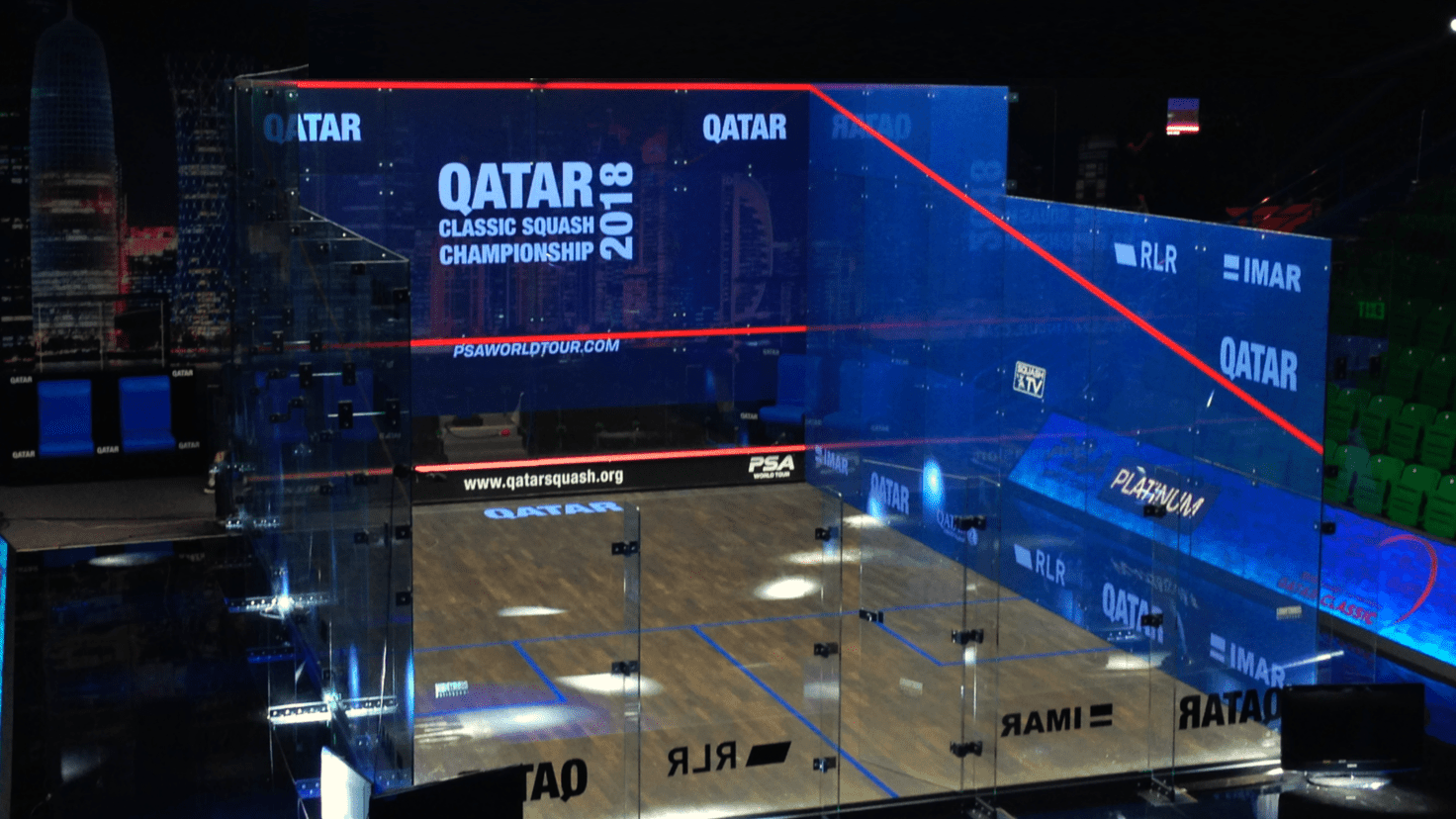 In 2018, SquashSite‘s Fram Gommedy and Steve Cubbins interviewed Andy Taylor during their coverage of the Qatar Classic Squash Championship. The video provides a glimpse into how Andy landed the role of Qatar Classic announcer, and reveals the tongue-in-cheek, contentious relationship between Andy and the “squash establishment.” Fram also dives into Andy’s relationship with his wife and his proudest achievements as a voice actor, broadcaster and stadium announcer.

In 2017, during Andy’s debut as the Qatar Classic compere, Squash Player Magazine‘s Ian McKenzie interviewed Andy for the December-2017 issue. The two discuss Andy’s rural existance in Southwest Missouri, his broadcasting career, how he first landed the role as the Voice of the US Open Tennis Championships, and how his experience as a tennis-host led to his new role with the Qatar Squash Federation. 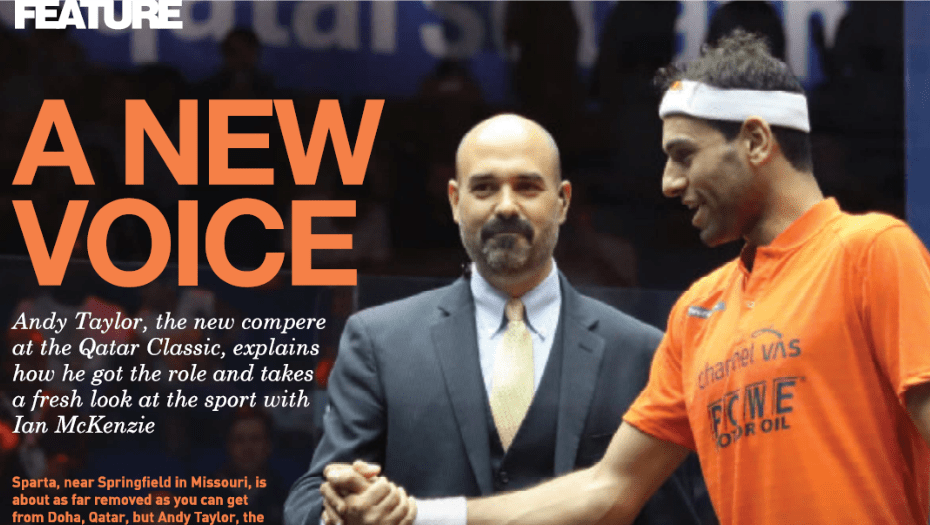 2021. In his first Major Final, Peru’s Diego Elias captured his debut PSA Platinum title, defeating World #2 Paul Coll of New Zealand in the championship match. Coll, who captured his first Platinum title two months prior at the British Open, is now a 6-time Major Finalist including three consecutive Finals appearances in Doha – at the 2019 PSA World Championship, along with Finalist runs at the 2020 and 2021 Qatar Classic Squash Championships.

2020. In March, due to the global spread of COVID-19, all professional squash events were cancelled following the Canary Wharf Classic, abruptly ending the 2019-2020 season. Six months later, play finally resumed at the Manchester Open, followed by the delayed PSA World Tour Finals, relocated to Egypt. At the time, the United States was dealing with a devastating second surge of COVID-19. As a result, both the Oracle NetSuite Open and US Open were cancelled. Andy Taylor suspended all travel. But the Qatar Classic resiliently endured under strict COVID protocols, as Ali Farag won his second successive Doha title, defeating World Champion Tarek Momen in the Semifinals and Paul Coll in the Final. The World #1 extended his Doha win-streak to 10 consecutive match victories since a Quarterfinal loss to Mohamed Elshorbagy in 2017 / Ali missed the 2019 World Championships in Doha due to a family emergency.

2018. During the Qatar Classic’s first year under the new PSA Platinum format, World #2 Ali Farag overcame one of the toughest draws any champion could endure. After a 1st-Round Bye, he survived 5-games with World #9 Mohamed Abouelghar. In the Round of 16, he defeated World #11 Saurav Ghosal. Then, with victories over 2016 Champion Karim Abdel Gawad, World #4 Tarek Momen and World #5 Simon Rösner, the surging Egyptian hoisted his 2nd PSA Platinum trophy.