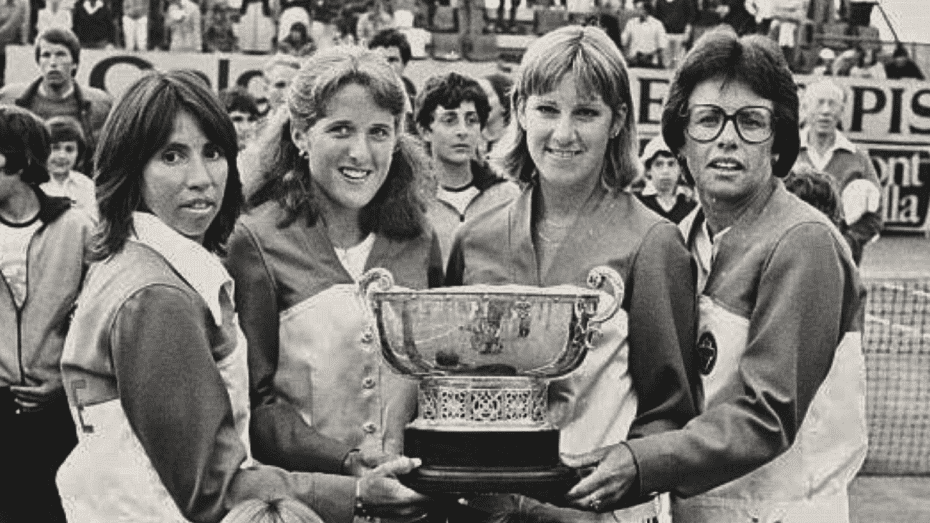 Andy Taylor has served as Team USA’s announcer during U.S.-based Ties since 2002

Andy Taylor announced his first Fed Cup Tie in 2002, when Fed Cup Captain Billie Jean King brought Lindsay Davenport, Monica Seles and Team USA to Springfield, Missouri to face Israel in the World Group Playoffs. Since then, he’s traveled the country to lend his voice to the ceremonial sport presentation behind each home-based Fed Cup Tie. Follow this link for more in-depth coverage, audio and video from each Fed Cup event. 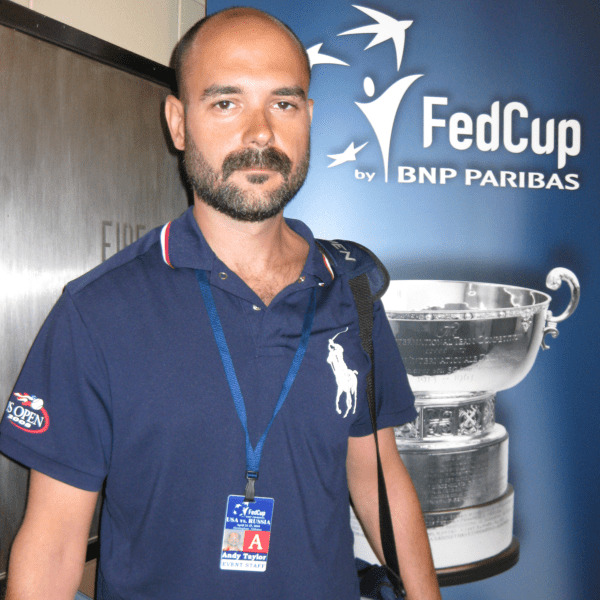 Delray Beach, San Diego, Stowe, La Jolla, Lowell, Surprise, Worcester, St. Louis, Tampa — It was that first Tie, at Cooper Tennis Complex in Springfield where Andy Taylor was offered the opportunity to become the Voice of the U.S. Open in New York — a role he still enjoys to this day.

Since Andy joined Team USA’s sport production team in 2002, the Americans have reached the Fed Cup Final four times. After home-based victories in Washington DC and Lowell, MA in 2003, the ladies reached the Final Four in Moscow, where they defeated Belgium in the Semifinals, then fell to France in the Final.

In 2009 and 2010, Team USA reached back-to-back Fed Cup Finals. Italy won both titles, first defeating the Americans at home in Reggio Calabria, then upsetting the U.S. Team in San Diego.

Seven years later, Team USA finally lifted the trophy for the first time since 2000, defeating Belarus in Minsk. After a Semifinal win over the Czech Republic at Saddlebrook in Tampa, Coco Vandeweghe single-handedly carried the U.S. to victory. She won both of her singles rubbers, then clinched Team USA’s 18th Fed Cup Title in the deciding doubles rubber with partner Shelby Rogers.

Team USA. The Most Successful in Fed Cup History

With players like Billie Jean King, Rosie Casals, Chris Evert, Tracy Austin, Pam Shriver, Gigi Fernandez, Mary Jo Fernandez, Jennifer Capriati, Lindsay Davenport, and the Williams Sisters, it is no surprise that the United States is the most successful team in Fed Cup history. Team USA has won 18 Fed Cup titles, including the inaugural event in 1963. They’ve appeared in 29 Fed Cup Finals, and hold the record for the most ties won, including 37 in-a-row and seven consecutive titles between 1976 and 1982.

Impressively, Team USA was able to reach the Fed Cup Final without the legendary talents of Venus and Serena Williams.

In April, Team USA hosted the Semifinal versus Russia in Birmingham, Alabama. In the 4th Rubber, Bethanie Mattek-Sands delivered a clutch win over Ekaterina Makarova to keep the tie alive, then teamed with Liezel Huber and advanced the team to its 28th Fed Cup Final.

While it didn’t work out for Team USA, the Final in San Diego was an absolute blast with the feisty Italians in town. We hosted the player party in the Crown Room at the world renowned Hotel del Coronado – featured in at least 12 Hollywood feature films, including 1959’s “Some Like it Hot” with Marilyn Monroe.

Again, without the Williams sisters, the ladies defeated Argentina at home — then the Czech Republic in Brno — to reach the 2009 Fed Cup Final versus Italy in Reggio Calabria.

The 1st-Round victory in Surprise, Arizona will always stick in my mind. It was my first introduction to the fearless tennis of Melanie Oudin. While Melanie lost her first rubber to Argentina’s Gisela Dulko, she kept the tie alive with a 3-set win in the 4th rubber, defeating Betina Jozami. Julie Ditty and Liezel Huber then sealed the victory in the deciding rubber.

Without Venus and Serena, the U.S. was given little chance of winning the tie versus Argentina. Melanie Oudin was clutch in the victory, and the win proved to be an insane confidence boost for the 17-year-old. That year, she’d go on to reach the Round of 16 at Wimbledon and the Quarterfinals of the US Open, where as a wild card, she defeated Anastasia Pavlyuchenkova, Elena Dementieva, Maria Sharapova and Nadia Petrova, before falling to Caroline Wozniacki.

While Melanie has struggled to resurrect the remarkable rhythm she established in 2009, she did win the US Open Mixed Doubles title with partner Jack Sock in 2011; and remains one of my most poignant memories of working with the United States Fed Cup Team. There’s nothing like watching an underdog blossom into a legitimate contender.

Fed Cup Competition. History and How it Works

…women’s tennis demands a truly international stage for players to represent their country, which is what the Fed Cup continues to provide. Tennis is a sport that is inherently individualistic, but Fed Cup, like Davis Cup, offers players the chance to play for their country within a tightly knit team. It’s a challenge that most players rise to… -- International Tennis Federation

Like Davis Cup, the Federation Cup is steeped in history. Hazel Hotchkiss Wightman is credited as the first woman to pioneer the women’s team tennis idea back in 1919. Over 40-years later, on its 50th anniversary, the International Tennis Federation launched Fed Cup in 1963, open to nations around the world.

Originally, the event featured just sixteen nations. The teams gathered in a new city each year, and competed for a week. Today, Fed Cup has grown to over 90 nations, competing worldwide over three weekends annually. February features the 1st round, with the Semifinals in April and the Final in November.

A Fed Cup Weekend (Tie) features a captain and four players from each country. The home team has choice of ground and court-surface for each Tie, factoring into strategy. Five different matches (rubbers) determine the outcome of the event. Saturday features two singles rubbers; then on Sunday, it’s reverse-singles, where the players swap opponents. A final doubles rubber caps-off the weekend, with the victor winning at least three of the five rubbers played.