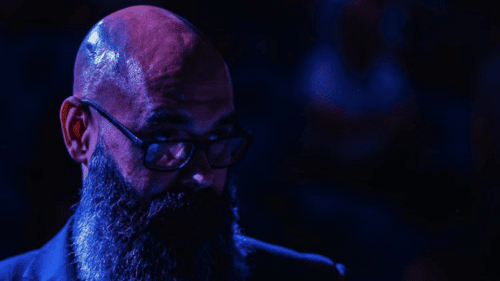 After reaching the Final of last year’s World Championship in Chicago, Epypt’s Tarek Momen vowed to do whatever it took to give himself another shot at the title. Mission accomplished. With 6 breathless victories, Momen became only the 18th man to capture the PSA World Championship, lifting the coveted trophy on one of his favorite glass courts on Tour.

He also made history. Tarek Momen and Reneem El Welily are the first married couple to both capture a World Championship title in the same sport. Remarkable accomplishment by two genuine role models, beyond the game.

Finalist Paul Coll’s road to the championship match was brutal, yet he endured – becoming the first man from New Zealand to reach the World Championship Final in 33-years. Ross Norman last achieved the feat in 1986, when he accomplished the impossible: Upsetting Jahangir Khan, snapping the Pakistani great’s ridiculous 555-match win-streak. Make no mistake. Ross Norman will not be the only Kiwi to lift this trophy. “Superman” continues to leap tall buildings in a single bound.

A special thanks to the Qatar Squash Federation, the PSA World Tour, and every single fan and athlete for a top-shelf week of World Championship Squash in Doha. My gratitude as well to Steve Cubbins and Nathan Clarke for their eye-popping photography, and to Fram Gommendy for her gentle guidance and expertise. Follow Steve and Fram year-round at SquashSite. 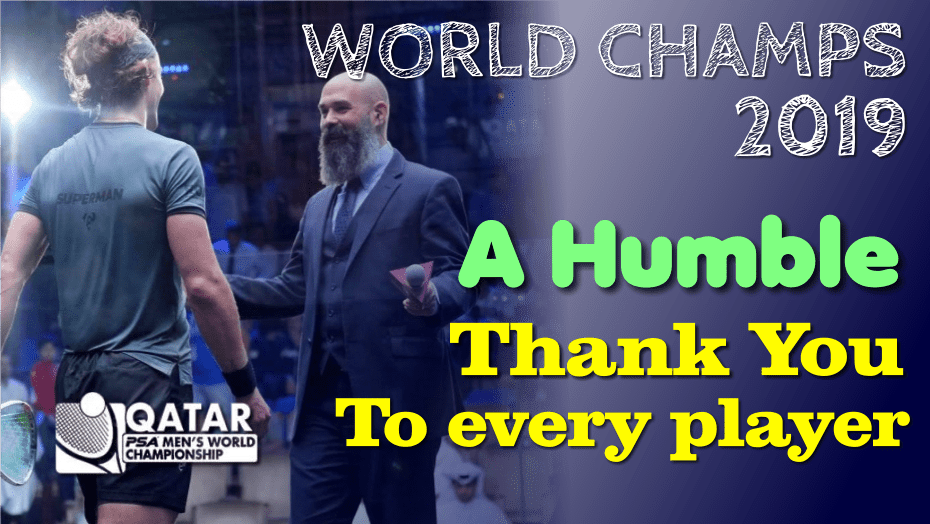 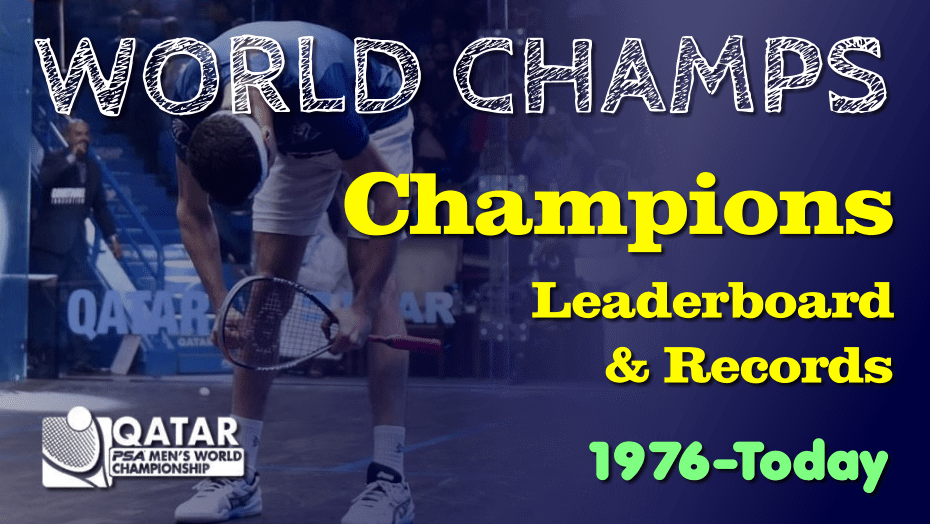 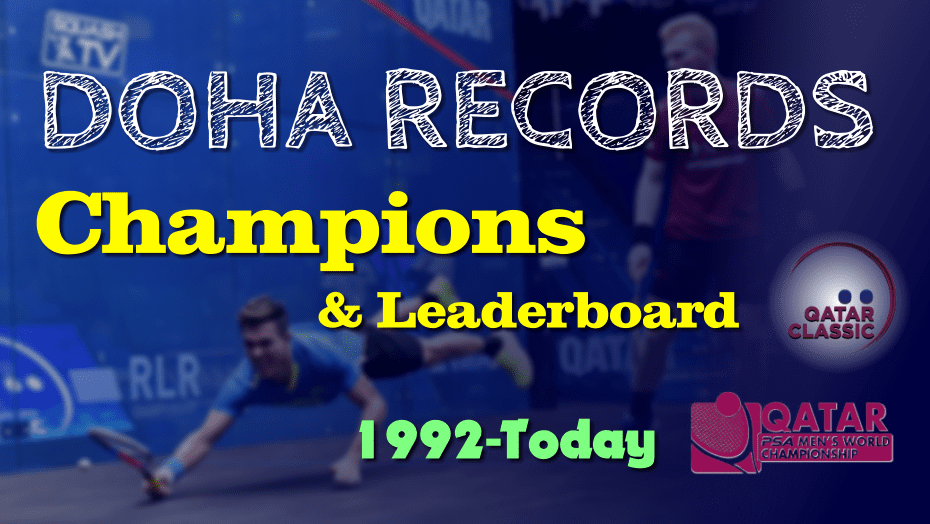 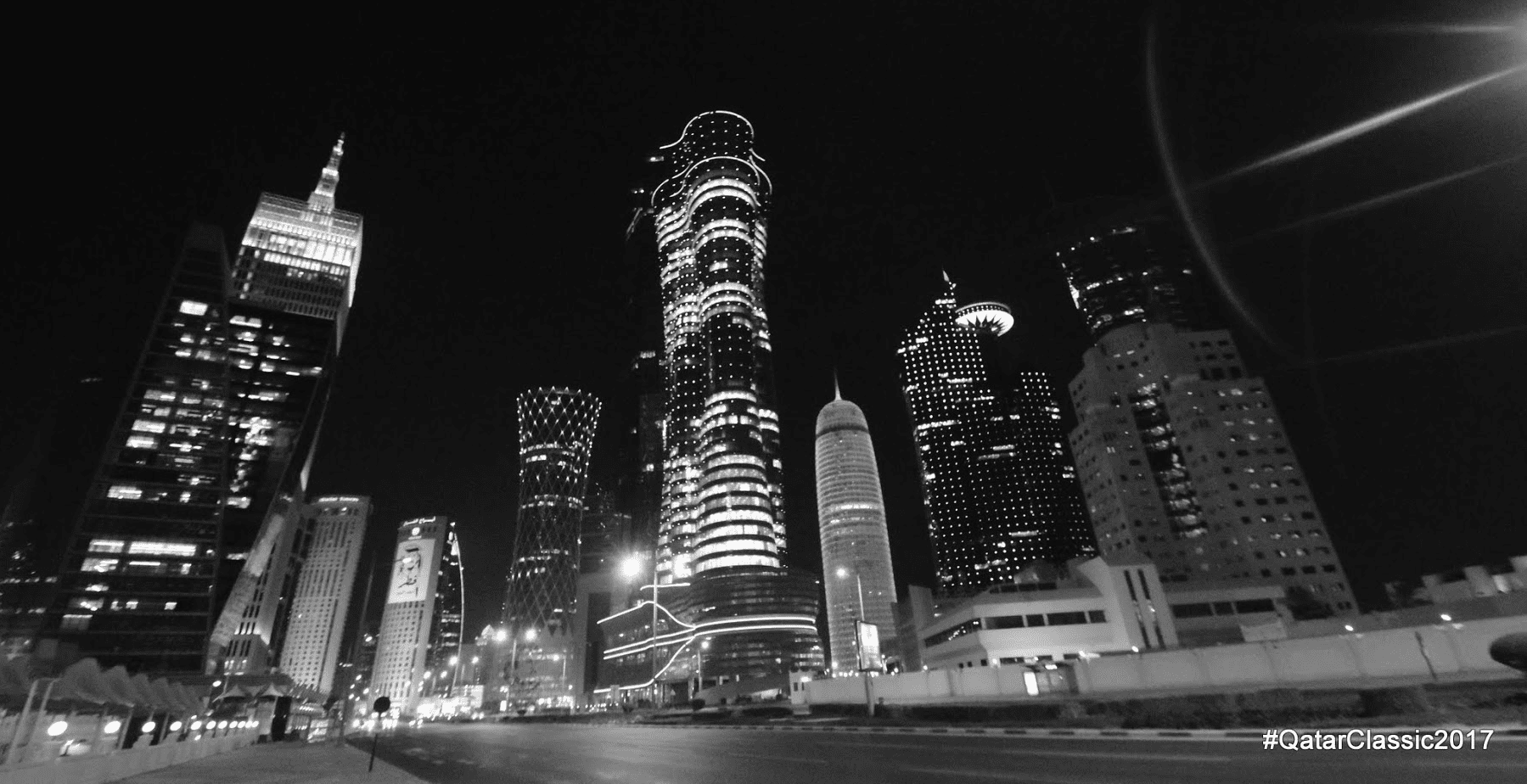 These tremendous athletes are some of the most thoughtful, modest and articulate characters in sport. Their passion to compete, respect for the game's heritage, and open embrace of new and insightful technology is both inspiring and infectious. The future of squash is now, and the game's expanding fanbase is a testimony to the talent, selflessness and humanity of today's professional players. It is truly a humbling honor to be back in Doha for the World Championships to share a few moments of individual achievement with these visionary athletes.
Andy Taylor

SIX FORMER WORLD CHAMPIONS AND FINALISTS DESCEND ON DOHA
Every year, Doha hosts the Qatar Classic Squash Championship – the second Platinum event of the PSA World Tour Season. However, in 2019 the sport’s most lucrative event returns for the fifth time.

There are two former World Champions in this year’s field: Mohamed Elshorbagy and Karim Abdel Gawad. Additionally, there are four past Finalists, including Tarek Momen, Marwan Elshorbagy, Omar Mosaad and James Willstrop.

CELEBRATING 41-YEARS OF CHAMPIONS
This year’s winner will become the 41st PSA World Champion, and gain direct entry into the PSA World Tour Finals this June in Cairo.

But the fact is, the brotherhood of World Champions is a tremendously exclusive group. While the trophy has been awarded 40-times since 1976, only 17 different players have captured the title. Should Mohamed Elshorbagy or Karim Abdel Gawad win this year’s World Championship, that number holds firm.

THE FIELD OF 64 AT THE QATAR PSA MEN’S WORLD CHAMPIONSHIP INCLUDES:
* The top-55 players on the PSA World Tour (as of the October rankings)
* 5 players who won Qualifying events
* 2 local Wild Cards
* 2 World Squash Federation invites

SOME WRINKLES THAT LIFTED OTHERS INTO THIS YEAR’S WORLD CHAMPIONSHIP:
When Youssef Ibrahim won the South Africa Open in August, he earned direct entry into the World Championship. The event in Cape Town was one of five qualifying events this year. Because Youssef was ranked inside the top-55 at the time, a position opened-up in the draw. Therefore Ben Coleman, the World #56 as of the October rankings, was granted a spot in the field.

Additionally, at the commitment deadline, 2 of the top-55 players did not join the field:

DEFENDING CHAMPION ALI FARAG’S ABSENCE PROVIDES OPPORTUNITY FOR BAPTISTE MASOTTI
With Ali Farag’s withdrawal from this year’s World Championship, one of the hottest young Frenchmen on Tour gained entry to this year’s draw. Baptiste Masotti is the World #59, and just participated in his first career PSA Platinum event at the Egyptian Open in Giza. There, he upset Borja Golan, Miguel Rodriguez and Eain Yow Ng to reach the Quarterfinals in his Platinum debut. Stay tuned!

DUE TO INJURY, WORLD #21 RYAN CUSKELLY WITHDREW FROM THE DRAW
This opened a position for India’s Vikra Malhotra, who was the World #60 as of the October rankings. With Malhotra’s Semifinal run at the Chicago Open a few weeks back, he climed to World #58 for November. Based in New York, Vikra brings serious momentum into this year’s World Championship. In just his second event of the young season, he captured his 10th PSA title at the SRFI India Tour. Three weeks later, he reached his 13th career Final at the NASH CUP in Ontario, Canada. Like Masotti, he’s enjoying one of his best seasons on Tour.

DUE TO INJURY, WORLD #50 KARIM EL HAMMAMY ALSO WITHDREW FROM THE DRAW
This opened a position for 20-year-old, French standout Victor Crouin, who was the World #61 as of the October rankings. A student at Harvard, Victor has excelled on the PSA World Tour after transitioning from the Junior ranks. At the tail-end of last season, he went on a 13-match win-streak, capturing 3 consecutive titles. And 2-weeks-ago, he made his Platinum debut at the Egyptian Open – where he reached the Round of 16 with wins over World #22 Cesar Salazar and World #15 Zahed Salem. He’s legit.