It was redemption for Oliver Marach and Mate Pavic in Friday’s Qatar ExxonMobil Open Doubles Championship.

The 2-seeds had played this year’s top-seeds once before, in the Stuttgart Final just 6 months prior. Jamie Murray and Bruno Soares captured the German title after an epic clash 67(4) 75 [10-5].

Both teams knew Doha’s title match would be a battle.

A partnership Saved by Stuttgart

After Oliver and Mate’s redeeming 2-set victory on Friday, during the trophy ceremony, Oliver revealed that he and Mate had considered ending their young partnership before June’s run in Stuttgart. They joined forces for the first time last year in Miami, and after falling in the 2nd-Round at Roland Garros, found themselves with a vanilla 7-7 record together.

Reluctantly, they entered the Stuttgart event and surprised themselves with a Semifinal victory over legends Bob and Mike Bryan, before falling to Murray and Soares in the Final. In their next event together, they reached the Final in Antalya, then went on to reach the Championship match at Wimbledon, where they fell to Lukas Kubot and Marcelo Melo 11-13 in the 5th set. The match was a history maker, and the two committed themselves to the remainder of the season. After a few Semifinal runs during the US Open Series, Marach and Pavic finally captured their first title together at October’s Stockholm Open, and finished 2017 with a 29-17 record.

With their victory on Friday, Pavic and Marach are now 4-0 in the new year. Clearly, the partnership will endure.

The Doha Doubles Championship was Mate and Oliver’s 5th championship match together. It was Jamie and Bruno’s 12th. Two time Grand Slam Champions, the 2016 Australian Open and US Open Champions knew they’d have to serve well to ensure victory. Unfortunately, Soares struggled from the “T” in both of his first-set service games. Pavic and Marach quickly took the set 6-2.

Set-2 was packed with deciding points. Both teams held through the tie-break, where Bruno was again broken twice, giving Mate and Oliver a 6-3 lead and triple championship point. After Bruno saved the first championship point, remarkably he and Murray saved two more on Pavic’s serve, despite the fact that Mate had been serving lights-out the entire match.

But at 6-all, in a blink, the momentum shifted again. With the always-reliable Jamie Murray serving, Pavic rifled a pass to earn match point #4, and the tandem of Marach and Pavic won their second title together on a mini-break.

Soares suffered his second loss in the Doha Final. He and long-time partner Alexander Peya fell to Czechs Tomas Berdych and Jan Hajek in the 2014 Doubles Championship match.

Mate Pavic and Oliver Marach’s Road to the Title

Bruno Soares and Jamie Murray’s Road to the Final

THIS TANDEM TEAMED FOR THE FIRST TIME LAST YEAR IN MIAMI; AND BY JUNE, FOUND THEIR GROOVE IN STUTTGART, WHERE THEY REACHED THE FINAL. TWO WEEKS LATER, THEY WERE FINALISTS IN ANTALYA, REACHED THE FINAL AT WIMBLEDON; AND IN OCTOBER, CAPTURED THEIR FIRST TITLE TOGETHER IN STOCKHOLM…EARNING A SPOT IN THE YEAR-END ATP FINALS IN LONDON.

AT 37-YEARS-OLD, HE OWNS 17 ATP WORLD TOUR DOUBLES TITLES, AND HAS BEEN RANKED AS HIGH AS #8 IN THE WORLD. LAST YEAR, HE REACHED FOUR CONSECUTIVE FINALS – TEAMING WITH MATE PAVIC IN STUTTGART, ANTALYA AND WIMBLEDON – THEN PAIRING WITH COUNTRYMAN PHILIPP OSWALT TO CAPTURE THE TITLE IN GSTAAD. IN ANTALYA, HE EARNED HIS 300TH CAREER MATCH VICTORY. A 2-TIME SEMIFINALIST HERE IN DOHA, HE IS COMPETING IN HIS 39TH CAREER CHAMPIONSHIP MATCH, FROM AUSTRIA – PLEASE WELCOME OLIVER MARACH

LAST YEAR, THIS 24-YEAR-OLD GRAND SLAM MIXED DOUBLES CHAMPION REACHED A CAREER-HIGH RANKING OF WORLD #15, AFTER WINNING THREE TITLES WITH THREE DIFFERENT PARTNERS. IN APRIL, HE WON THE TITLE IN MARRAKECH WITH DOMINIC INGLOT, CAPTURED THE HAMBURG TITLE IN JULY WITH IVAN DODIG; THEN IN OCTOBER, HE AND OLIVER MARACH EARNED THEIR FIRST TITLE TOGETHER IN STOCKHOLM. HE NOW OWNS 8 ATP WORLD TOUR DOUBLES TITLES, WAS A SIX-TIME FINALIST LAST YEAR ALONE, AND IS COMPETING IN HIS 22ND CAREER CHAMPIONSHIP MATCH. FROM CROATIA – PLEASE WELCOME MATE PAVIC

TOGETHER, THESE FORMER YEAR-END WORLD #1’S ARE 2-TIME GRAND SLAM CHAMPIONS, AND ARE COMPETING IN THEIR 12TH CHAMPIONSHIP MATCH ON THE ATP WORLD TOUR. SEMIFINALISTS HERE IN DOHA LAST YEAR, THEY WENT ON TO REACH THE FINAL IN SYDNEY, WON THE TITLE IN ACAPULCO, THEN WON BACK-TO-BACK TITLES IN STUTTGART AND QUEENS CLUB, BEFORE FINISHING THE SEASON WITH TWO MORE FINALS APPEARANCES IN CINCINNATI AND TOKYO, AND A SEMIFINAL-RUN AT THE YEAR-END ATP FINALS IN LONDON.

AT 35-YEARS-OLD, HE OWNS 26 CAREER ATP WORLD TOUR DOUBLES TITLES IN ALL, IS A 5-TIME GRAND SLAM CHAMPION WITH 3 ADDITIONAL MIXED DOUBLES TITLES, AND IS A 2-TIME OLYMPIC QUARTERFINALIST. A FINALIST HERE IN DOHA 4-YEARS-AGO WITH PARTNER ALEXANDER PEYA, REMARKABLY HE IS COMPETING IN HIS 52ND CHAMPIONSHIP MATCH. FROM BRAZIL – PLEASE WELCOME 2-TIME QATAR EXXONMOBIL OPEN FINALIST – BRUNO SOARES 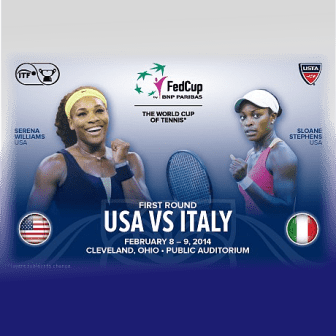 FED CUP: Make it two years in a row! 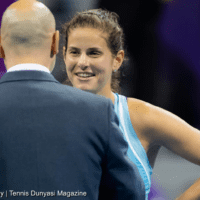 Shocking Upsets this week in Paris