Victoria Azarenka is on a mission. She dismantled Magdelena Rybarikova on Thursday 6-0, 6-0 to reach the BNP Paribas Open Semifinals for the third time. After her win over Sam Stosur Tuesday, I told the 2012 champion that I hadn’t seen her THIS animated, this DETERMINED in quite awhile. Was I crazy? Did she light a fire under her ass when she arrived at Indian Wells? She shrugged it off – said she was just happy to be back on tour, putting the work in, playing top-level tennis…blah, blah, B.S.

Look – my opinion? Vika knows that a win here gets her back in the top-10. Once there, she can set her sights on what this is really all about: Reclaiming World #1…(or at least giving herself opportunities to face Serena). It’s all or nothing with Vika. The injury and necessary time-off was a TOUGH pill to swallow. The mountain she’s had to climb just to get back into the top-15? A necessary evil. She’s handled it with notable maturity – through insanely hard-work and by surrounding herself with a team of expert climbers. She has nearly reached the second highest peak in her journey. From there, she knows she can set her sights on the summit. She can smell it. And the sense of urgency is obvious in how she’s carried herself on and off the court these past two weeks.

Azarenka will face World #19 Karolina Pliskova Friday night for a spot in the Final. Pliskova pulled double-duty on Thursday. She won her Quarterfinal match over Daria Kasatkina, then headed straight over to Stadium-2 with doubles partner Julia Georges and earned a spot in the doubles final. Karolina and Julia will face Americans Betthanie Mattek-Sands and Coco Vandeweghe in Saturday’s Final.

Thursday on Stadium-2 featured both WTA Doubles Semifinals and one of two Doubles Quarterfinals from the ATP World Tour.

Julia’s excited. With their 6-4, 6-3 win over Errani and Kalashnikova, Australian Open Semifinalists Karolina Plishkova and Julia Georges will play in their first WTA Premier Mandatory Final together. We’ve also given Julia the “style points” shot of the tournmaent for completely whiffing on an overheard, pirouetting, then delivering a deep forehand into play. Impressive.

NEXT: Bethanie Mattek-Sands and Coco Vandeweghe in the Final.

The defending champions, Jack Sock and Vasek Pospisil are still alive after a straight-sets win over Philipp Kohlschreiber and Dominic Thiem. The North American tandem now owns 4-titles together, including a Wimbledon Championship…not to mention, they’re undefeated here in Indian Wells (8-0). They’ll certainly have their work cut out for them on Friday afternoon…

NEXT: Feliciano Lopez and Marc Lopez

The 3-seeds Timea Babos and Yaroslava Shvedova owned this match, taking the first-set 6-2. Vandeweghe dropped serve at ball-up, while Mattek-Sands was broken down 2-4. In the second, Bethanie Mattek-Sands and Coco Vandeweghe turned up the heat, and the two stole set-2 on a Babos double fault. In the match tie-break, Mattek-Sands rolled her ankle and hit the deck as the pair went up 2-0. After a six-minute medical time-out, they steam-rolled to victory 2-6, 6-4, 10-4.

After the win, Bethanie said she was happy the match wasn’t on television, because it was an AWKWARD ankle-roll. The point was actually over, and she was just turning to high-five Coco when she went down. She told those in Stadium-2 not to worry – she’ll be ready for the Final on Saturday.

NEXT: Julie Georges and Karolina Pliskova in the Final. 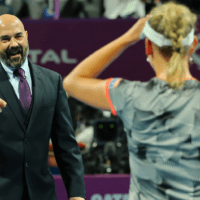