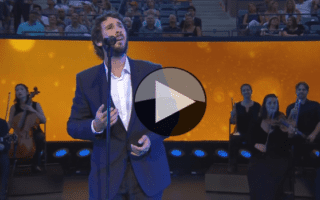 Round-1 here in Arthur Ashe Stadium:

Dominika Cibulkova (SVK) def. [7] Ana Ivanovic (SRB) – Arthur Ashe Stadium’s first match of the 2015 US Open saw Dominika Cibulkova overcome nerves and wasted serves as she upset World #7 Ana Ivanovic in three sets. Broken out of the gate, Dominika came back from a 0-2 deficit to deliver the first set 6-3. She then dropped the second 3-6. In the decider, Dominika was broken again in game one, but rattled-off four straight wins leading to an Ivanovic “medical” time-out. Ana would win the next game, then nearly break Cibulkova to get back on serve…nearly. Down 15-40, Dominika fought back to deuce, overcame a double fault and eventually picked up her fifth game of the set. Meanwhile, Ivanovic would pick up a court violation for racquet abuse. Though she double faulted on triple match point, in the end, Cibulkova took the first round match 6-3, 3-6, 6-3 over Ivanovic. Next up: American Jessica Pegula, who defeated Belgium’s Alison Van Uytvanck in straight sets.

[23] Venus Williams (USA) def. Monica Puig (PUR) – 13-years, 3-months and 10-days her junior, Monica Puig gave 2-time US Champion Venus Williams a run for her money on Monday. In the first set, Puig jumped out to a 2-0 lead, breaking Venus in game-one. Williams would right the ship, leveling the set at 3-all. Up 5-4, Venus played perfect tactical tennis with pinpoint placement to earn her second break AND the set 6-4. Deuce duels dominated the 2nd set. At 3-4, Puig came from behind to level it at deuce again – waving her arms in the air, desperately seeking support from Arthur Ashe Stadium. Two points later, she found herself down 3-5. With a chance to serve out the match, it was Williams’ turn to hiccup. Puig attacked, and brought the set back on serve at 5-all thanks to remarkable defense and overpowering serves. In the tie-break, Venus leapt out to an early lead. Puig would save 3 consecutive match points to stay alive, fight off another match point, then extend play by winning the breaker 9-7. Exhausted, 2-hours in, Venus managed an early break in the third and went up 4-2. Both missed several opportunities in a game-7 loaded with unforced errors. While Puig would eventually win the game, she dropped the remaining two. The 2000 and 2001 US Open Champ secured the win 6-4, 6-7(7), 6-3. Next up: American Irina Falconi, who defeated fellow American Samantha Crawford in straight sets.

[1] Novak Djokovic (SRB) def. Joao Sousa (BRA) – Just another day at the office for Novak Djokovic, who only gave up 3-games in his 71-minute rout of Brazil’s Joao Sousa: 6-1, 6-1, 6-1. Next up: Austrian Andreas Haider-Maurer, who upset Canada’s Vasek Pospisil in five-sets. Haider-Maurer was actually down 2-sets to 1 after getting blanked in a third-set tie-break; but he dominated the rest of the way with a bagel and a breadstick in the fourth and fifth sets.

Opening Night Ceremony – Monday’s night session launched with a dramatic Opening Night Ceremony featuring Josh Groban, Lena Hall and Vanessa Williams. NYC mayor Bill de Blasio welcomed the the world to Flushing while USTA president Katrina Adams and Billie Jean King segued to footage of Josh Groban doing “whatever he could” to be a part of the Open. (See video – click the image above) During his performance, Josh welcomed Tony-award winner Lena Hall to the court and belted out a bunch of tunes I never have…nor ever will relate to. But hey, it sounded great? Ceremonial honor guards from the New York City Police and Fire Departments then set the stage for Vanessa Williams’ rendition of the National Anthem.

[1] Serena Williams (USA) def. Vitalia Diatchenko (RUS) – The Opening Ceremony’s anticlimax. The fact is, Russia’s Vitalia Diatchenko was in no condition to play her first round match with the World #1. She had ankle surgery earlier this year and tried to gut-it-out by making an appearance here in Queens. Serena’s slaughter started immediately, and after two extended visits with the trainer, Vitalia threw-in the towel just two games into the second set. Serena’s first test in her historic attempt at the Calendar Grand Slam was nothing more than a flea bite. Williams advanced 6-0, 2-0 (ret) and will face Dutch woman Kiki Bertens in the second round. Diatchenko will receive a healthy $39.5k for giving it the “ol’ college try.”

[8] Rafael Nadal (ESP) def. Borna Coric (CRO) – After the draw, many were convinced that Borna Coric would provide “Monday’s Major Upset” with a win over Rafa. The two played last year in Basel, where the 17-year-old upset Nadal 6-2, 7-6(4). Since winning the Junior US Open Boys title two years ago, Coric has already upset two top-five players and improved his ATP ranking to #33 in the world. He’s hot. But Arthur Ashe Stadium is a huge stage – a stage where Nadal has hoisted trophies twice before. Nadal took full advantage of his experience, comfortably attacking without a single thought of the swirling winds that have plagued players in the past. The new roof, though only partially finished, has allowed the experienced to focus more on their strengths, rather than conditions. Despite dropping the third-set, Rafa cruised into the second-round with a 6-3, 6-2, 4-6, 6-4 win over one of the next generation’s most promising prospects. He will face Argentina’s Diego Schwartzman in Round-2, who defeated Sweden’s Elias Ymer in straight sets today. 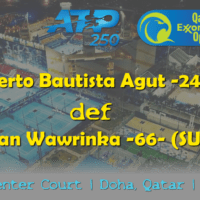 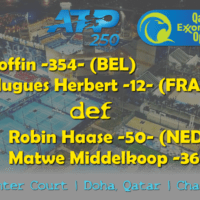