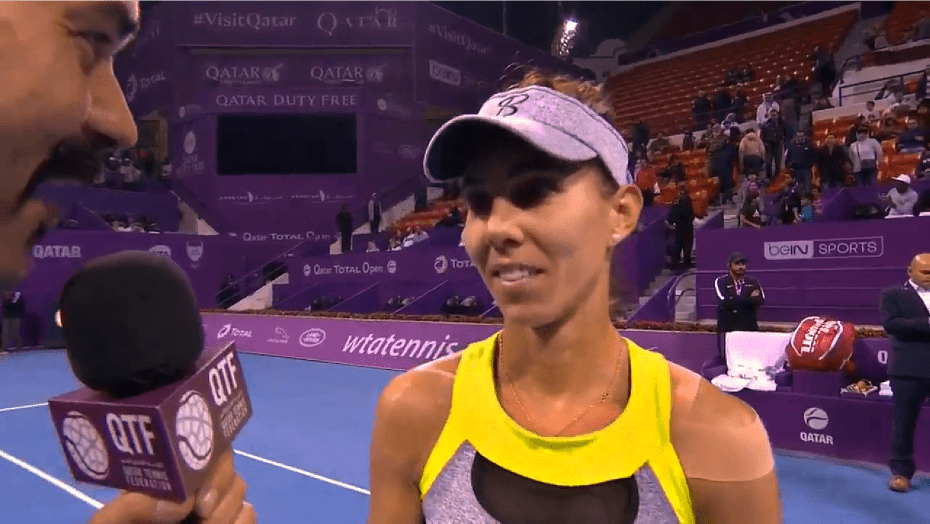 ……29-year-old Mihaela Buzarnescu has quietly made a charge into the Round of 16 in her Qatar Total Open debut. That is correct – at 29-years-old, this is her first trip to Doha. Why? Because for most of her career, she has traveled and toiled on the ITF circuit. Until last December, her highest year-end ranking was World #155. For over 10-years, the closest she came to Tour-level draws was the 1st or 2nd-Round of qualifying.

A resurgence for the ages

Many would argue that Buzarnescu’s climb to the WTA’s top-50 over the past year is light-years more-inspiring than Roger Federer’s triple Grand Slam comeback that also started in early 2017.

Rehabbing from yet another injury at the tail-end of 2016, Mihaela was ready to throw in the towel. Her friends and family intervened, desperately convincing her to make one final push to play the best tennis of her career. And she delivered.

Last year, the woman played like a Tour-level pro possessed. She earned 7 ITF Women’s Circuit Singles titles, reached 9 Finals, played in her first career Tour-level Semifinal in Linz and ended the year as the World #56. After a run to the Finals week-2 of the season in Hobart, she comes into Doha as the World #43.

So let’s do some math here.

At the start of 2017, she was ranked #540 in the World and fell in the 2nd-Round of Qualifying during her season’s first event at the Australian Open. This week, after all the ITF victories last year and Tour-level career firsts, she is the World #43. In just 13-months, she climbed 497 spots in the rankings. Sublime.

Another career-first: A top-10 victory

In the final 2nd-Round match of the Qatar Total Open 2018, Mihaela’s improbable run continued with a straight-sets victory over the reigning French Open Champion. At just 20-years-old, Jelena Ostapenko was the heavy favorite. She reached the Final on this court just two years ago. She’s a Grand Slam champion.

But none of that mattered late Wednesday night. Buzarnescu earned a convincing 61 win in the first, and overcame Ostapenko’s opening break in the second to win it 63.

A conversation with Mihaela

Mihaela Buzarnescu last played Goerges 9-years-ago in the Round of 16 in Bucharest. Goerges got the win 61 62. Truthfully, both are completely different players today.

After the past 13-months, it’s difficult to count Mihaela out of any matchup, but Goerges is playing some of the best tennis of career. She just reached the Semifinals in St. Petersburg; and after back-to-back titles to close 2017, captured the season opener in Auckland. It’s hard to bet against the German, who comes into Doha with a career-high ranking of World #10.

Last month, this 29-year-old reached her first career WTA Final in Hobart, and comes into this year’s Qatar Total Open with a career-high ranking of World #43. And this is incredible – in 2017, she started the season ranked outside the top-500; but over the course of the year, earned 7 ITF Women’s Circuit Singles titles (in 9 Finals), reached her first career Tour-level Semifinal in Linz, and ended the year as the World #56 – climbing an unheard-of 484 spots in the rankings. She now owns 22 ITF Singles titles in all, 34 Doubles titles; and on Monday, defeated Lesia Tsurenko to reach tonight’s 2nd-Round match in her Doha debut. From Romania – Please welcome, Mihaela Buzarnescu

Two-years-ago, at just 18-years-old and ranked #88 in the World, she played absolute fearless tennis on this court, and reached the Final in her Doha debut. A year later, she became a Grand Slam champion, defeating Simona Halep to win the 2017 title at Roland Garros. With the victory, she became the first Latvian player ever to win a Major, and was the first unseeded player to win the French Open in 84-years. Last September, she won her second title in Seoul, cracked the WTA’s top-10 for the first time, and ended 2017 by making her WTA Finals Singapore debut. Competing in her 2nd Qatar Total Open, she comes into Doha with a career high ranking of #6 in the World. From Latvia – Please welcome 2016 Qatar Total Open Finalist, Jelena Ostapenko