Kristina Mladenovic is authentically excited. She should be. Over the weekend, she single-handedly lifted France back into the Fed Cup World Group Semifinals. Mladenovic won both of her singles rubbers over Kirsten Flipkens and Elise Mertens, then teamed with Amandine Hesse to win the deciding doubles rubber. The celebration in front of a home crowd in Mouilleron le Captif was real…but short-lived.

On Monday afternoon, she hopped a flight to Doha, and basically won Tuesday’s 1st-Round match over Shuai Peng with zero sleep and zero preparation on Khalifa’s fast surface.

Kristina and Peng are all too familiar with each other’s game. They’ve faced each other coutless times in doubles. Tuesday’s 1st-Round match was the first time they’d ever squared-off in singles.

Kristina came into the match with two strikes against her: She had just arrived in country about 12-hours earlier, plus she had played indoors all weekend and had no time to prepare for Doha’s conditions. Perhaps that lack of conditioning and expectation helped her. She was loose and in complete control.

Mladenovic won five straight games to capture set-1, then earned a timely break in the second to go up 5-4. After serving out the victory, she was more surprised than anyone at her performance.

Up Next: 19-year-old Anna Blinkova

The news couldn’t be any better for the World #13. Her 2nd-Round opponent will be Qualifier Anna Blinkova, who upset Elena Vesnina in an odd 1st-Rounder highlighted by Vesnina’s sinus struggles.

It will be the first career meeting between the two, and could prove to be a difficult one for Mladenovic if scheduled on an outer court. Blinkova has already played two qualifying matches outside of center court and will have a better feel for the conditions.

For the past year, this 4-time Grand Slam Champion has been on fire. A Fed Cup Finalist in 2016, over the weekend – with wins over Kirsten Flipkens and Elise Mertens in both singles and doubles – she anchored her country’s Fed Cup victory over Belgium, lifting France back into the World Group Semifinals this April. The week prior, she reached her 8th WTA Singles Final in St. Petersburg. Remarkably, she was a 4-time Singles Finalist last year, won her debut title, made her Grand Slam Quarterfinal debut at Roland Garros, and earned a career-best, year-end ranking of #11 in the World. In doubles, she’s reached the Finals of all 4 Majors, owns 2 Grand Slam Doubles titles, 2 Mixed Doubles titles, and has won 16 Doubles titles overall in 27 career Finals. Competing in her 5th Qatar Total Open, from France – Please welcome, Kristina Mladenovic

This 2-time Grand Slam Doubles Champion won the doubles title here in Doha 4-years-ago; and with the victory, became the first player from China in the history of the sport to attain the World #1 ranking. She now owns 21 WTA Doubles titles, has reached 3 Grand Slam Finals, and captured the doubles title at the year-end WTA Finals in 2013. With a baseline game and two-hands from both sides, she’s enjoyed an equally impressive singles career. Ranked as high as #14 in the World, she’s a 9-time Singles Finalist; and last year in Nanchang, won her 3rd WTA Singles title. A Singles Semifinalist at the 2014 US Open, she owns 13 wins over top-10 opponents, including a victory over World #5 Francesca Schiavone here in Doha just seven years ago. Competing in her 6th Qatar Total Open, from China – Please welcome, Shuai Peng 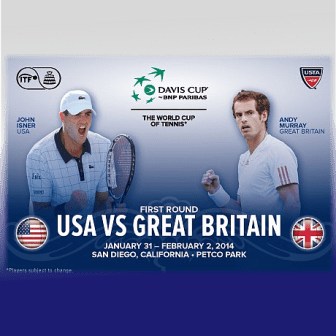 2014 Week-9: From Roger’s Title in Dubai to World Tennis Day