Announcer Andy Taylor | The Voice of the US Open | Photo: @USOpen

This was not fun.

Like the day before, the heat and humidity for Tuesday’s matches in Arthur Ashe Stadium was off the charts. As a spectator, the entire experience of watching in person felt shamefully cruel. After Fucsovics won the second set, I hesitantly tweeted:

Not to be overly dramatic, but this is like watching two dogs locked in a hot car. These are tough matches to enjoy as fans. Feels inhumane. That said, same conditions for both. We'll see who's left standing after (at least) four.

Novak in Survival Mode until late in the third

Tuesday was the first time Novak Djokovic had ever faced the ATP’s top-player from Hungary. The reigning Wimbledon champ knew it would be a battle regardless of conditions. Fucsovics earned career-best victories in 2018, including a win over “Big Match” Stan Wawrinka en-route to his first Tour-level title in Geneva. At the Australian Open, Marton defeated World #13 Sam Querrey – becoming the first Hungarian man in 34-years to reach the Round of 16 at a Grand Slam.

Accustomed to the sport’s biggest stage, Novak earned an early break in the first set and carried that advantage the rest of the way. By set-2, both had gone through several shirts. The heat clearly took hold of Novak after the first changeover. One of the best returners in the game, he shattered a racquet after giving up a brilliant Fucsovic serve-and-volley – then double-faulted at deuce during his next service game, eventually giving up the break. After 1:26, the match became a best of three.

Before the start of the third, Djokovic sat wrapped in three ice-towels, doing whatever he could to cool his core. Fucsovics took a bathroom break. Novak refused treatment from the trainer. When the set began, Marton maintained momentum. He broke Djokovic again before the first changeover, and held the advantage through 2-more sit downs. But up a break at 4-3 – it all came apart.

Novak ripped a forehand winner to go up 0-15. Fucsovics swatted a couple of forehand unforced errors and picked up his only point with a backhand volley behind a pounding serve. Novak stole the game and the momentum with a backhand winner, and the 13-time Major Champ won 10 straight games to earn the victory.

For the first time ever at a Major, due to the extreme heat, Novak and Marton were allowed a ten minute break between the 3rd and 4th sets. In his interview after the match, Novak admitted that he was simply in “Survival Mode” for most of the first three sets, and the break was critical, even after crushing Fucsovics to take the third. Although he did admit that it was a bit awkward in the locker room.

I want to thank US Open for allowing us to have a 10-minute break after third set. I think we both needed it...but it was funny because Marton and I were (in the) ice bath one next to another...We were naked in the ice baths and it was quite a wonderful feeling - battling with a guy for 2 and a half hours and then you get into the locker room, you haven't finished the match, and you're naked in the ice baths. It was quite a magnificent feeling I must say.

Novak’s only loss this Summer came on the racquet of Stefanos Tsitsipas in Toronto’s Round of 16. Djokovic went on to win his first Cincinnati title with a straight sets victory over 7-time Champion Roger Federer, becoming the first player in tennis history to complete the Career Golden Masters.

Last month, this 2-time US Open Champion won his 13th career Grand Slam Singles title, defeating Rafael Nadal in the Semi’s – then Kevin Anderson – to claim his 4th Wimbledon crown. In 2016, he became just the 8th man in tennis history to earn the Career Grand Slam, defeating Andy Murray to capture the title at Roland Garros; and with the win, became only the 3rd man in history to hold all four Grand Slam titles at the same time. Over the Summer, he made history again, becoming the first player ever to complete the Career Golden Masters, capturing his first Cincinnati title with a straight sets victory over 7-time Champion Roger Federer. Remarkably, he now owns 70 ATP World Tour Singles titles in 101 career Finals. From Serbia, please welcome 2011 and 2015 US Open Champion, Novak Djokovic.

This 26-year-old is enjoying a breakthrough year on the ATP World Tour. In January, he became the first Hungarian man in 34-years to reach the Round of 16 at a Grand Slam; earning the biggest win of his career, defeating World #13 Sam Querrey en-route to the Australian Open’s 4th Round. He started the year by reaching his 9th career ATP Challenger Tour Final in Canberra; and then in May, earned his maiden ATP World Tour Singles title in Geneva, upsetting 2-time defending champion Stan Wawrinka en-route to the Final. Last week, he reached a career-high ranking of World #40, and is making his Arthur Ashe Stadium debut. From Hungary, please welcome, Marton Fucsovics. 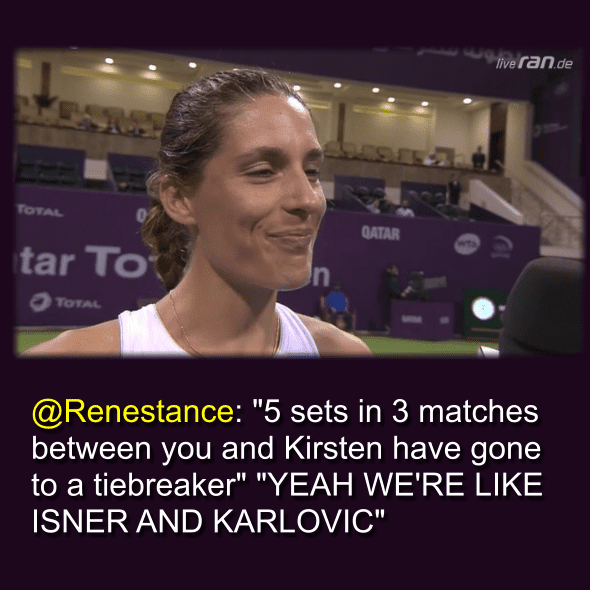 Doha: Day-2. Survival of the Fittest.