Kristyna Pliskova advanced through to the second-round of Qualifying with a 3-set win over American Sachia Vickery 6-0, 4-6, 6-3. The two had already played a 3-setter in January, in the final round of qualies of the Australian Open. Pliskova won that match as well, then upset Sam Stosur in Melbourne’s first round of main draw play. She fell in Round-2 to Monica Puig.

Here at Indian Wells, Kristyna will play Xinjun Han Tuesday at 11:00 on Stadium-5 in round-2 of Qualifying. Coming off of winning her 9th ITF Women’s Circuit Singles Title two weeks ago in Kreuzlingen, Switzerland…Kristyna’s on the hunt to reach the main draw here in Indian Wells and battle her way toward the WTA’s top-20, like twin sister Karolina. As of today, Kristyna’s ranked #103. Karolina is World #19 and enjoying a first-round bye in the BNP Paribas Open main draw.

This woman can hit a tennis ball.

Naomi Osaka carries a ton of momentum into Indian Wells. After a career-best 3rd-round Grand Slam run at the Australian Open – where she defeated Elina Svitolina (who just won Kuala Lumpur over the weekend) – she comes into qualifying with a career-high ranking of #106 in the world. Monday’s match with Tamira Paszek was no cake-walk. Naomi broke to start the match, but quickly fell behind 1-4. After dropping the first set 5-7, she won the second 6-4 with a driving forehand up the line. After both received extended medical timeouts, a battle of wills strangled the decider. Osaka scored a crucial break to go up 4-3, and then served out the win 6-4.

After her first-ever win at Indian Wells, she demanded QUESTIONS not conversation in the post-match interview. I had no idea what I was getting into. This is the type of winner that could make Bud Collins’ toes curl. I love that. We had a few laughs at my utter inability to put “questions marks” on my feeble attempts at leading conversation; but she did take time to thank the fans for being so supportive during a qualifying match in the desert.

While this rising star may loathe the post-match experience and those tasked with “talking tennis” after a win, I can’t help but adore and appreciate her talent and perspective. I hope to continue seeing her this week and share even more ridiculously uncomfortable moments with her on court. Next up: Germany’s Laura Siegemund Tuesday starting at 11:00 on Stadium-7.

Taylor Townsend is winning. As you can see in the tweet below, she won the BNP Paribas Open pre-qualifying tournament, earning a Wild Card into the qualifying draw. She didn’t waste the opportunity, scoring a straight-sets win over Russia’s Evgeniya Rodina 6-2, 7-6(1).

Taylor is currently ranked #379 in the world and – this year – has been struggling just to make it through qualifying in ITF tournaments. However, keep in mind, just a year ago she was ranked inside the top-100 and scored a 1st-Round main-draw win here at Indian Wells over fellow American Bethanie Mattek-Sands. With the amount of wins she’s accumulated in the desert since last week, she is “in-rhythm” and a threat to all-comers in the qualifying draw. Next up: Anastasija Sevastova of Latvia (World #92) in Tuesday’s second-match on Stadium-2.

Gotta hand it to Kirsten Flipkens. She showed serious endurance with her 7-5, 6-3 win over American Louisa Chirico Monday night. Kirsten raced to Indian Wells after reaching her third career WTA final in Monterrey Sunday, falling to champion Heather Watson 6-3, 2-6, 3-6. With a jump to #59 in the rankings, Kirsten is hoping for a deep-run here at Indian Wells to climb even closer to her her career-high ranking of World #13 three years back. Next up: Aliaksandra Sasnovich of Belarus (World #102) in Tuesday’s third qualifying match on Stadium-7.

The seeds have been placed and the remaining field of 128 has fallen into place with the WTA’s main draw. Once qualifying wraps on Wednesday, the women’s draw will be solidified. The ATP draw happens Tuesday at 3:00 in Stadium Plaza. By the conclusion of ATP qualifying on Thursday, both BNP Paribas Open draws will be locked and loaded…

So…this happened on Monday. Maria Sharapova admitted to having used a “recently-banned” substance for the past 10-years of her playing career. While she received an email notification of the updated banned substances back in December, she did not discover that the “medicine” (Meldonium) she’d been using was added to the banned substance list on January 1st, 2016. She tested positive for the drug at the Australian Open and now faces a potentially substantial suspension from the ITF. Maria: “I let my fans down, I let the sport down that I’ve been playing since the age of 4 that I have loved so deeply…I know that with this, I face consequences…I made a huge mistake. I don’t want to end my career this way.”

I made a huge mistake. I have let my fans down: Maria Sharapova after admitting to have failed drug test at Aus Openhttps://t.co/AsqTdCcu3V

Here is the release from the ITF regarding the case.

Nike has suspended its relationship with Maria Sharapova after she failed a drugs test https://t.co/5W6giNqtFj pic.twitter.com/2GOYMu4n1G

World Tennis Day is Tuesday, with the BNP Paribas Showdown at Madison Square Garden in New York. The one night event features Serena Williams vs. Caroline Wozniacki and Gael Monfils vs. Stan Wawrinka. The four appeared at a benefit in New York for the USTA Foundation Monday night. 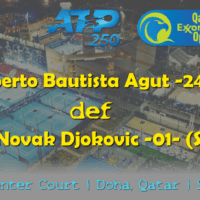 Roddick wins a big one before the Olympics!

The Impenetrable Kastles. Three in a row!