Round-2 here in Arthur Ashe Stadium:

[20] Victoria Azarenka (BLR) def. Yanina Wickmayer (BEL) – Victoria Azarenka is a two-time finalist here in Flushing, and knew she’d have her hands full with Yanina Wickmayer. The hard-hitting Belgian has enjoyed some serious success on Arthur Ashe Stadium over the years. In 2009, Wickmayer upset Sara Errani, then Petra Kvitova en route to her only career Grand Slam semifinal appearance. In the first set, there were five breaks of serve. Wickmayer took the early lead breaking Vika in game one. Down 3-4, Vika broke to get back on serve. Then Wickmayer broke again to go up 5-4 with a chance to serve out the set. No dice. She immediately fell behind Love-40 and Azarenka would level it at 5-all. In the end, Vika stole the first set with a break (7-5). Up 4-3 in the second, Vika scored another timely break giving herself a chance to serve out the match, but Wickmayer wouldn’t have any of it. Yanina broke to close the gap, but it was too little, too late – Vika secured her spot in Round-3 on serve. Final: Azarenka 7-5, 6-4. Next: Angelique Kerber (GER).

[2] Simona Halep (ROM) def. Kateryna Bondarenko (UKR) – Halep continues to win. Before Flushing, she fell to Serena in the Cincinnati Final…a week after a Finals appearance in Toronto. There, she retired in the third set after splitting two tie-break sets with Belinda Bencic. Simona is back into the US Open 3rd-Round after a 6-3, 6-4 win over new Mom and 15-year veteran Kateryna Bondarenko. Simona’s best US Open performance came in 2013, where she fell in the Round of 16 to Flavia Pennetta. Now that she owns 11 titles (3 this year alone), she’s a favorite to dominate her half of the draw and force Serena to earn tennis’ first Calendar Slam since 1988 (Steffi Graf).

[3] Andy Murray (GBR) def. Adrian Mannarino (FRA) – Adrian Mannarino has spent the past 5-weeks watching his ATP World Tour ranking slip. Since reaching the Bogota Final in July, he’s been drop-kicked early from three consecutive events on the US Open series. With 1st-Round losses to Soeda, Sock and Seppi, he came into Flushing determined to reinvent his Summer’s reality…and he started off strong. In the first set, Mannarino broke Murray to go up 6-5, fell behind Love-40, then climbed back to deuce and claimed the set. At 4-all in the second, Adrian broke again and served it out 6-4. Unfortunately, that’s about all Mannarino had in the tank. In the 3rd, Andy leapt out to a 3-0 lead and took the set 6-1. In the 4th, at the 2-hour and 30-minute mark, Mannarino double faulted to fall behind 1-2, eventually losing the set 3-6. All even after four, Mannarino was done. Murray served it out with a 6-1 final set. Next up, the 2012 US Open Champ will face Brazil’s Thomaz Bellucci who has yet to drop a set with wins over James Ward and Yoshihito Nishioka.

[2] Roger Federer (SUI) def. Steve Darcis (BEL) – Surpise! Roger Federer is into the 3rd-Round of the US Open. Okay, so…no surprise. Not much of a compelling match, either. Roger’s early-round dominance, however IS compelling, and an indication of his unequivocal confidence as we roll into Round-3. Here’s the scoop: The GOAT only gave up 4-games the entire match. He won it 6-1, 6-2, 6-1. After the match, the previous 90-minutes weren’t even worth discussing. Roger and ESPN’s Tom Rinaldi discussed the Chinese exhibit at the Metropolitan Museum of Art…and the fact that Roger is now tied with Serena for the most night-session wins at the US Open (He’s 29-1). With the win Thursday night, he surpassed Andre Agassi on the all-time list. Next up for Fed: Philipp Kohlschreiber, who defeated Lukas Rosol today in three sets. Roger and Philipp have played nine time before. Kohlschreiber has yet to win a match, though he did take Roger the distance in Halle earlier this year, falling to Fed in a deciding tie-break (5-7).

The Final: Petra Cetkovska 6-4, 5-7, 7-6(1). After taking the first set, Cetkovska jumped out to a 4-1 lead in the second. To Caroline’s credit, she focused-up, delivered four straight games, then broke Petra at 6-5 to even the stakes. In the decider, Cetkovska fought off four match points – two of them down 5-6, 15-40, thanks to fearless forehands that painted the lines. Even when she was down, Petra never stopped going for her shots – and when she landed those two precision saves, Wozniacki was rattled. The tiebreak was an afterthought. Cetkovksa’s on to Round-3 where she’ll face Flavia Pennetta on Saturday. 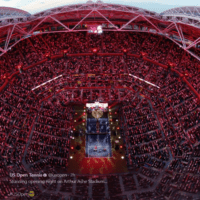