[26] Flavia Pennetta (ITA) def. [5] Petra Kvitova (CZE) – Yikes. Crushed for Kvitova. Petra has played brilliantly over the past two-and-a-half weeks. She defended her title in New Haven and has been playing with a comfortable confidence fueled by renewed self-awareness after her mono diagnosis.

The question coming-in to today’s Quarterfinal was: Would Petra have the mental stamina to win down-the-stretch against a streaky Pennetta. This morning, I told the guys in the booth: “This will either be Kvitova in a dominant two sets, or Pennetta in three.” Turns out, it was the latter. Flavia will face Simona Halep on Friday. It’s Pennetta’s second career US Open Semifinal (fell to Victoria Azarenka in 2013).

Petra was in-control early, up a break in the first-set 4-2. Flavia would break-back to 4-5, but Kvitova responded with another solid return game to claim the set 6-4.

In the second, Petra was up a break at 3-1…the match on her racquet. But Pennetta dug-in. The Italian would level-it at 3-all. Kvitova won an excruciating deuce battle to go-up 4-3, but lost momentum…and plenty of fluids. The heat took it’s toll. Pennetta delivered a routine hold, then worked Kvitova again to break and go up 5-4. While Kvitova was able to erase two break points, Flavia would win on serve to take set-2, 6-4.

By the third, both were completely depleted. Pennetta scored a break to go up 3-2, then again to go up 5-2. By her final service game, Flavia was in complete control, running Petra all over the court. She’d win the match 6-2 in the third, and answer Pam Shriver’s post-match questions from a courtside seat. Match time: 2-hours and 23-minutes.

[2] Simona Halep (ROU) def. [20] Victoria Azarenka (BLR) – As New York’s humidity continued to build, so did the threat of rain. Neither Halep nor Azarenka appeared to care, both completely focused on the task at hand. Halep secured the first break, then held serve to take the first set 6-3.

Azarenka took a lengthy bathroom break, and came out firing in the second. She jumped out to a 3-0 lead. Up 5-3, serving for the set, Vika couldn’t close it out. Halep broke to keep the set alive, serving for a chance to level the set. Undeterred by the blown opportunity, Azarenka dug-in, played an aggressive return game, and broke Halep to make it “the best of one.”

By the third, the rain was nearly upon us, and game-1 took forever. Vika finally held. Technical issues with the challenge and review system slowed the start of game-two, and the distraction affected Halep. Before she knew it, she was down 0-2 in the decider. Irritated with herself, Simona ripped two winners to go up 0-30, eventually winning the game to get back on serve.

At the 2-hour and 11-minute mark, Halep serving 40-15, the rain finally hit. 90 minutes later, she took it to 2-all, broke to go up 4-3, then served out the match to reach her first US Open Semifinal (3rd career Grand Slam Semifinal). NEXT: Flavia Pennetta.

Wawrinka crushed Anderson, only allowing the South African eight games. Throughout the Open, Kevin had only been broken four times before the Quarters. Stan never got the memo. He was locked-in on Anderson’s serve from ball-up, delivering five breaks to close it out 6-0 in the third, occasionally using Federer’s popular SABR tactic, charging second serves for half volleys. NEXT: Roger Federer – an all Swiss Semifinal on Friday.

[2] Roger Federer (SUI) def. [12] Richard Gasquet (FRA) – With one break in the first and a Gasquet double fault to end the second, Roger Federer found himself up 2-0 in record time Wednesday night. In the third, he leapt out to a 3-0 lead, broke again to go up 5-1, then served out the match. The five time US Open champ was beyond-dominant versus a healthy Gasquet who’s been playing some of his best tennis of the year, free of the lingering back pain that’s troubled him forever.

After the win, Roger told ESPN’s Darren Cahill that he benefitted from playing John Isner in the Round of 16. After dealing with John’s crushing serves on Monday, he was seeing the ball more clearly, giving him an edge on Gasquet. Darren told Roger that Stan had busted-out the SABR several times in his win over Anderson, to which Roger responded: “(In the Semifinals) the longest rallies will only be three shots.” Truth be told, Roger has been playing out of his mind (even for him) at this year’s Open. He’s a fan/analyst favorite to reach the Final. Can he claim his 6th? We’ll see what Stan has to say about that on Friday.

Doubles Exhibition: Mardy Fish and Jim Courier def. Michael Chang and John McEnroe – As John McEnroe put it after the match: “It was nice of Roger Federer to agree to be the opening act for us tonight.” After Roger’s quick win over Richard Gasquet, Arthur Ashe Stadium was left starving for more. Even the likes of Bradley Cooper, Jimmy Fallon and Justin Timberlake stuck around to see the legends put on a show…and the legends didn’t disappoint. Loaded with laughter and fun with fans, the fellas played for 90-minutes. Fish and Courier clinched the win in a match tie-break: 3-6, 6-2, [10-8].

The highlight for me? Having the opportunity, in person, to wish Mardy Fish all the best in life’s next chapter. He’s pure class. I haven’t run into Mardy since 2007 when the US Davis Cup Team won the title in Portland, Oregon. At the time, Mardy wasn’t in the mix, but he was on the bench, selflessly supporting his buddies Bob, Mike, Andy and James. After the win, at the official dinner, the USTA brought me in to voice-over a few of the evening’s events and activities. I was tucked away in the back, but when Mardy heard my voice, he got up and sought me out. He formally introduced himself, saying he wanted to finally meet the man behind the voice he’d heard for years, rattling off his accomplishments before matches at the US Open and Davis Cup Ties.

Genuine, authentic and real – he and Patrick McEnroe then introduced me to the rest of the guys. I’ll never forget Mardy’s sincerity. His kindness. His appreciation. That moment stuck with me, and I couldn’t have been more thrilled to see him crack the top-10 and enjoy tremendous success on the court. There’s no doubt in my mind – as he blends his natural compassion with the raw and determined work-ethic he honed in chapter-1, Mardy Fish has a very rewarding future…as do many he will touch along the way. I’m grateful he had a chance to say “so long” on his own terms at this year’s Open. 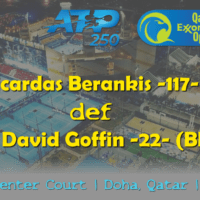 The Olympic Tennis Semifinals are set…