Fernando Verdasco advances to the Round of 16

Originally from Madrid, Fernando Verdasco and family spend a healthy chunk of time in Miami…but they call Doha home. Over the years, the former World #7 has developed a close relationship with the Chairman of the Higher Organizing Committee, His Excellency Nassar bin Ghanim Al-Khelaifi – the same humble Al-Khelaifi who is president of the Paris Saint-Germain football club. It’s always good to have friends in high places.

Not to mention, it’s always good to launch the season at a home event, and sleep in your own bed each night. With a 9-month-old son at home, Fernando loves the fact that he can ease into the season and still spend time with family before making the trek to Melbourne. A Semifinalist here in 2017, and a 2-time Doha Doubles Semifinalist, the Southpaw’s hungry for his 8th title. There’s no ATP-250 he’d like to win more than the Qatar ExxonMobil Open.

At 36-years-old, over the past 18-years this 3-time Davis Cup Champion has amassed 7 ATP Singles titles, 8 Doubles titles, won the year-end Doubles Championship at the ATP Finals, and has been ranked as high as World #7. A Semifinalist at the 2009 Australian Open, he’s a 23-time Finalist and owns 15 career victories over top-5 opponents – including Novak Djokovic, Andy Murray and Rafael Nadal. A fan favorite here in Doha, with a home at the Pearl, he was a Semifinalist on this court 3-years-ago and is a 2-time Doha Doubles Semifinalist. Competing in his 8th Qatar ExxonMobil Open, from Spain – This is Fernando Verdasco.

Don’t discount the enduring stamina of 36-year-old Fernando Verdasco. The Madrid native has been a Doha resident for years, with a place in The Pearl just north of Doha’s City Center. He knows these courts better than most on Tour, and always sleeps in his own bed during week-1 of the season. In 2017, he reached the Semifinals in both Singles and Doubles. In fact, he had 5 match points against champion Novak Djokovic before a crushing collapse in set-2’s tiebreak.

The tenacious Southpaw may not be the imposing threat he was 11-years-ago when he reached the Australian Open Semifinals, but he can still be a foil for tennis’ top talent. Just ask Karen Khachanov, who Fernando beat twice in back-to-back clay Masters events last season. Or Dominic Thiem, who fell to Verdasco in Rome’s 2nd-Round.

While Fernando’s concentration has been known to buckle under pressure, no one doubts his competitive passion and ability to grind. The man has competed in 66 consecutive Majors – the second longest active streak on the ATP Tour – behind Feliciano Lopez at 71. Last season at Wimbledon, he reached the Final-16 of a Grand Slam for the 18th time. And though he fell in Round-2 at the US Open, Verdasco pushed Hyeon Chung to a deciding-set tiebreak. Like last year’s Doha champion, Roberto Bautista Agut, Fernando Verdasco is a relentless machine.

This 33-year-old is back in Doha for the first time in 4-years, and his return to the top of the sport is beyond inspiring. A consistent top-50 talent for years – in late 2015, an elbow injury threatened his career. 2-and-half-years and three surgeries later – he returned pain-free in 2018, capturing 3 Challenger titles and his fourth career ATP Tour title in Marrakech. Then last year, he won 3 more Challenger titles, was a Finalist in Marrakech, and reached the Final-16 of a Grand Slam for the first time at the US Open. At this time two years ago, he was ranked outside the top-1500 – today, he is back in Doha as the World #64. From Spain – welcome back Pablo Andujar.

Tennis is unforgiving on the human elbow. No one understands this better than Pablo Andujar. By 2015, the Spaniard had spent three consecutive seasons ranked inside the top-50. He’d won 3 titles and reached 7 Finals, including his first ATP-500 Final at the 2015 Barcelona Open. Sure, he’d go weeks without a victory – but Pablo would deliver Quarter, Semi or Finalist runs when he needed them most, steadying his spot on Tour.

That said, at the height of his momentum in 2015 – after reaching Wimbledon’s 3rd-Round for the first time and climbing to a career-high ranking of World #32 – pain in his right elbow slammed on the brakes. During a Quarterfinal in G’staad, he could barely even serve in the deciding set. He toughed-out the hard-court season, then decided to rest the elbow until 2016, hoping to avoid surgery.

The rest didn’t help. His only win during the first two months of 2016 came here in Doha. After defeating Paolo Lorenzi in the 1st-Round, he lost six consecutive matches and finally settled on surgery. By September, now ranked outside the top-500, he was back on court winning matches at the Challenger level – but the elbow still wasn’t right.

So, that November Pablo got married – and in 2017, endured two more surgeries. His son was born in July. He was off the Tour and focused on family and recovery. As Pablo put it during an interview with Tennis Magazine: “I started to see tennis as a part of my life but not my whole life, and that is very important. Otherwise you get depressed because you have had two-and-a-half years that you can not do what you want to do, what you have been doing since you were a kid. But now when my baby boy smiles at me and enjoying the good relationship I have with my wife, this is the best feeling in the world.”

After playing a pair of Futures events at the end of 2017, Pablo launched his comeback in 2018. Finally pain free, he won 3 Challenger titles and captured his first Tour-level title in 4-years, dropping only a single set to lift the trophy in Marrakech. That February, he was ranked outside the top-1800. By November, Andujar was again a top-100 talent on Tour. A truly inspiring recovery. 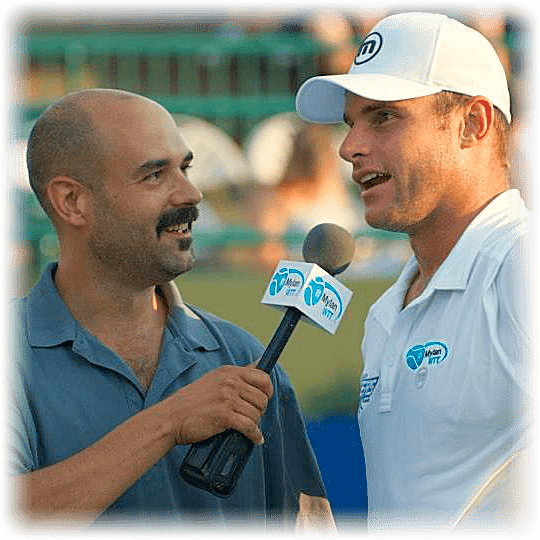