Is there any better way to enjoy your first trip to Doha? Though disappointed with his early exit in singles, Juan Monaco relished the opportunity to team again with Rafael Nadal. They last paired in Chile two years ago, where they finished as finalists. In Doha, they’d lift the championship trophy with a 6-3, 6-4 win over Austrians Julian Knowle and Philipp Oswald, playing in their first event together. 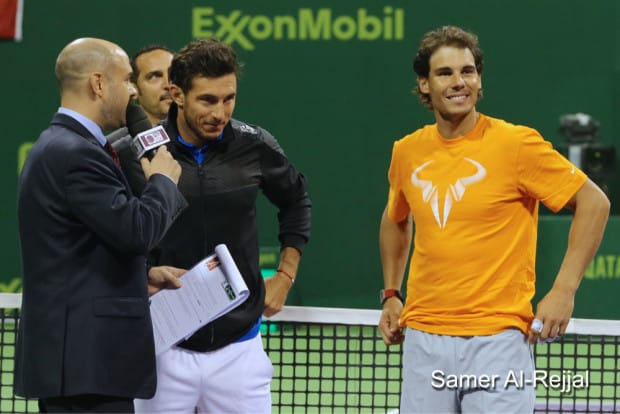 When they last paired in Vina del Mar, it was Nadal’s triumphant return to the game after 9-months off with a knee injury. A finalist in both singles and doubles in Chile, he would go on to have one the most successful years in the history of the sport. He won 10 titles in 14 finals, including Roland Garros and the US Open; finishing 2013 with a 75-5 record and the World #1 ranking.

Last year, Nadal started the season by winning his first-ever week-1 title here in Doha. He’d reach the Australian Open Final, where he struggled with back issues against Stan Wawrinka. He’d win Rio and his 27th Masters-1000 trophy in Madrid en route to his 9th title at Roland Garros. At Wimbledon, he fell in the Round of 16 to Nick Kyrgios, then missed the US Open with a wrist injury. His comeback during the Asian swing was sidelined by appendicitis…and he’s spent the last two months recovering at home in Mallorca.

The Qatar Exxon Mobil Open 2015 was his first event back, and while Rafa dearly wanted to defend his singles title, he fell in the first round to German qualifier Michael Berrer, who played the match of his life. A true doubles specialist – Ha! On THESE courts anyway – Nadal earned his 9th career and 4th Doha doubles title. In 2005, he won the doubles title with Albert Costa, then with Marc Lopez in 2009 and 2011.

Undiscouraged, Nadal is looking forward to the Australian Open and thankful for the time he got to spend on court with a great friend tuning up for the long season. He’s realistic. It was his first event back after a dodgy final five months of 2014. The first-round exit is no reason to panic. A week-1 doubles championship is worth celebrating. The time on court: priceless.

The Qatar ExxonMobil Open 2015 Singles Championship will start tomorrow at 6:00p local time in Doha, featuring David Ferrer and Tomas Berdych. David won a nail-biter over Ivo Karlovic in three tiebreak sets. Berdych has yet to be broken in this year’s tournament and has completely dominated all comers, including Andreas Seppi in the semifinal.