Good grief. This has not been an easy week for tonight’s winners Maria Jose Martinez Sanchez and Andreja Klepac. The 8-seeds at this year’s Qatar Total Open; after a routine win on Tuesday, they have battled through three match tie-breaks to reach tomorrow’s championship match.

To make matters worse, they got screwed by the schedule. Their opponents in tomorrow’s Final wrapped up play at 6:00pm. Jelena Ostapenko and Gabriela Dabrowski will be well rested.

Meanwhile, Maria Jose and Andreja didn’t take the court until nearly 10:00pm, thanks to Petra Kvitova’s deciding-set win over World #1 Caroline Wozniacki. After coming from behind to win the match tie-break, Martinez Sanchez and Klepac didn’t get off the court until 11:30pm. With a 3:30pm start for the Doubles Championship tomorrow, there’s no rest for the weary.

Another Match Tie-Break Victory for the 8-Seeds

At the start of set-2, Maria Jose gave up a double fault to fall behind a break. Down 15-40 in the following game, Lyudmyla Kichenok responded in kind – leveling the set. Two or three deciding-point games later, Martinez Sanchez and Klepac broke Kichenok again, then held the rest of the way to force a match tie-break.

Incredibly, Maria Jose and Andreja came back from a 3-8 deficit to win it 12-10. Though completely exhausted, the two will take a stab at their second career title together tomorrow afternoon. It will be their third Final as a team, and second this year, after reaching the Brisbane Final week one of the season

Last month in Brisbane, this tandem started the new season by reaching their second career Tour-level Final together. Last year, they teamed for the first time at the Australian Open, and in just their 6th event together, captured the title in Tokyo.

This 31-year-old now owns 5 career WTA Doubles titles and has been ranked as high as #23 in the world. A 12-time Finalist on Tour, last year she reached Wimbledon’s 3rd-Round for the first time, and was a Quarterfinalist at the US Open for the 3rd consecutive year. Two years ago, in Melbourne’s Mixed Doubles, she reached the Semifinals at the Australian Open. Competing in her 8th Qatar Total Open, from Slovenia – Please welcome, Andreja Klepac

At 35-years-old, this 3-time Grand Slam Semifinalist owns 18 WTA Doubles titles, and is a 29-time Doubles Finalist on Tour. 9-years-ago, she won the biggest doubles title of her career on this very court, capturing the the year-end doubles championship at the WTA Finals, right here in Doha. Ranked as high as #4 in the World, she is competing in her 5th Qatar Total Open, and was a Semifinalist here just 2-years-ago. From Spain – Please welcome, Maria Jose Martinez Sanchez

This tandem has teamed for the first time here in Doha, and upset 2014 Qatar Total Open Champions Hshei Su-Wei and Peng Shuai in Round-1, then 3-time Grand Slam Champion and Olympic Gold Medalists Elena Vesnina and Ekaterina Makarova in the Quarterfinals.

This 35-year-old owns 30 career ITF Women’s Circuit Doubles titles; and last year, reached her first three Tour-level Doubles Finals – capturing her debut WTA Doubles title in Nottingham. She went on to reach the 2nd-Round at Wimbledon for the first time and comes into her first Qatar Total Open with a career-high doubles ranking of #51 in the World. From Australia – Please welcome, Monique Adamczak

Last month in Hobart, this 25-year-old reached her 5th career WTA Doubles Final and climbed to a career-high ranking of #46 in the world. She owns two WTA Doubles titles, has been a member of country’s Fed Cup Team since 2010, and is through to the Semifinals in her third Qatar Total Open appearance. From Ukraine – Please welcome, Lyudmyla Kichenok

First Round Down – Qatar ExxonMobil Open 2014 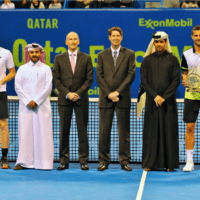