There hasn’t been a Wimbledon Champion from the U.K. since Fred Perry earned his third consecutive Gentleman’s Championship back in 1936. First Tim Henman, now Andy Murray – over the past 25-years the British press has been relentless with scrutiny and expectation – willing top-ranked U.K. players through victories, ruthlessly dissecting their performance and resolve in defeat. And the scrutiny wasn’t just during the most prestigious Grand Slam in tennis, the scrutiny followed the players every waking moment of every day. In truth, it’s been annoying, and understandably a huge burden for the players.

Like the Red Sox fan before 2004, the rabid British tennis fan adored their top-players, but became accustomed to disappointment. Even with Henman or Murray up 2-sets to love in key matches, there was always a sickening knot in the pit of their stomachs, anticipating collapse…expecting failure.

Since Henman’s retirement from the game, all of the pressure has been on Andy Murray. Did he truly have the resolve, the dedication to excellence, the mental toughness to end the U.K.’s Wimbledon drought. Was he as committed to the game as the fans were committed to supporting him? Was it even possible to win Wimbledon with all-time greats like Roger Federer, Rafael Nadal and Novak Djokovic choking the top of the ATP World Tour rankings?

Then, in 2011, Murray had an amazing Asian swing, followed by the announcement that he’d hired Ivan Lendl as his coach and mentor. Last year, after a crushing defeat by Federer in the Wimbledon final, he won Olympic Gold over Roger on the same court a few weeks later, then went on to win his first Grand Slam title at the U.S. Open. This January, Novak Djokovic took him out in four in the Australian Open Final, Juan Martin del Potro eliminated him in the Indian Wells Quaterfinals, yet he managed to save a match point and win the Sony Open in Miami. But then, he puzzled fans by taking-off the entire clay court season to prepare for Wimbledon. Was it a smart move? Was last year Andy’s peak, or was it just the beginning? Would Andy be able to end the 77-year-old drought at the All-England Club?

With both Nadal and Federer upset early, among a string of other surprises and early retirements, the final was inevitable. Murray would most likely have to face Djokovic…the man he beat for the US Open title, but the man who slayed him Down Under in January. Yet now, having tasted success in the spotlight versus both Djokovic and Federer, there was a deeper belief and visualisation of victory, from both Andy and the fan in his corner. Sunday’s final had the feeling of “now or never” – like the Red Sox dominant World Series performance in 2004 over the St. Louis Cardinals – and Murray finally delivered with a decisive 3-set win.

Despite Olympic Gold and a US Open title, those accomplishments simply weren’t good enough for Andy and the dark shadow of U.K. expectation. Now that he’s conquered Wimbledon, let’s hope the world of tennis can now turn the page and move-on to the next chapter.

On the ladies side, Marion Bartoli won her first Grand Slam title with a win over giant-slayer Sabine Lisicki, and moves up to 7th in the WTA Rankings. Sabine defeated Serena Williams and Agnieszka Radwanska on her way the final and climbs 24-spots in the WTA rankings to #18 in the world.

Bob and Mike Bryan continue to rewrite tennis history. With a win over Ivan Dodig and Marcelo Melo in the Wimbledon final, they are now the current champions of all four Grand Slams and Olympic Gold Medalists. After the match, Mike said: “This one feels like a ribbon around our career.” The guys have won 24 consecutive matches and don’t show any signs of slowing down as they prepare for the hard-courts in Flushing.

In another first, Hsieh Su-Wei of Taiwan and Shuai Peng of China won their first Grand Slam Doubles title with a victory over Aussies Ashleigh Barty and Casey Delacqua. Hsieh is the first player from Taiwan to ever win a Grand Slam championship.

In Mixed, Daniel Nestor won his 11th Grand Slam doubles title, this time with Kristina Mladenovic (her first). 2013’s been a great year for the pairing. They were finalists at the French Open back in May where they lost the title 10-6 in the Super Tie-Break to Czech’s Frantisek Cermak Lucie Hradecka.

This week, the guys play ATP World Tour 250 events in Sweden, Germany and at the Hall of Fame Tennis Championships in Newport, Connecticut. Ivo Karlovic is back on the court in Newport, after spending the past two months recovering from viral meningitis. The ladies host clay events in Hungary and Italy, and the 2013 World Team Tennis season gets underway tonight at UC Irvine, Springfield, Missouri, Washington D.C. and Sacramento. The Emirates Airline US Open Series starts July 22nd in Atlanta (men) and Stanford (ladies). 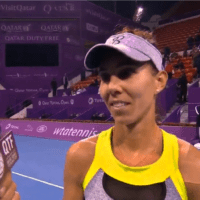 Update from Asia – Roddick loses in 1st Round