A Finalist two months ago at the Next Gen ATP Finals in Milan, 20-year-old Andrey Rublev knew he had the tools to take-down Fernando Verdasco. After all, in their first meeting – when Andre was just 17-years-old, Rublev defeated Verdasco on clay in Barcelona. They played again this past October in the 1st-Round of the Paris Masters, where Verdasco emerged the victor in two tiebreak sets.

Losing in two breakers left a bad taste in Andrey’s mouth. He was itching for redemption.

Wednesday’s Round of 16 match didn’t start well for the young Russian. Conditions were swirly, and both needed the first three games to adjust. Neither held. When Rublev went down a break again in game-3, he spent some time throttling his racquet bag during the changeover.

Despite the wind induced sloppiness, Rublev hung-on and started finding his rhythm at the tail end of the first. He broke to level the set at 4-all, then held, forcing Verdasco to serve to keep the set alive. Fernando felt the pressure. A double fault gifted Rublev set-point, and he capitalized with a huge forehand pass to gain the early lead.

Momentum was a pendulum in this match. In the second, it swung Verdasco’s way. Fernando earned his first break to go up 3-2, but at 4-3 found himself down 0-40. With triple break point, by all appearances the pendulum was swinging back to Rublev. Remarkably, Verdasco recovered, served his way out of the hole, then stole set-2 on a Rublev double fault.

In the third, conditions improved, as did the quality of play. Fernando opened with a love hold and both protected serve through the halfway mark. At 3-all, Andrey earned his first break opportunity of the set, and converted. Two service games later, he was in front of the camera for the victor’s interview.

Next up: Quarterfinals. Borna Coric

Over on Court-2, Borna Coric scored his first career victory over Nikoloz Basilashvili. He and Nikoloz played twice last year, in Lyon and Cincinnati. Basilashvili won both – three sets in Lyon and a second-set tiebreak victory at the Western & Southern Open. While Borna missed on his first match point Wednesday, up a set and 5-1, he earned the win during his next service game.

Borna is brimming with confidence. In his first match of the new season, he earned his 7th career top-10 victory, defeating Pablo Carreno Busta in a deciding set tiebreak.

The two ATP Next Gen stars will face-off in Thursday’s second Quarterfinal in Doha. Andre Rublev and Borna Coric have played once before – last November at the Next Gen ATP Finals. Rublev won in straight sets.

AT 20-YEARS-OLD, THIS ATP NEXT-GEN STAR HAD A BREAK-THROUGH SEASON IN 2017. HE STARTED THE YEAR AT THE AUSTRALIAN OPEN, AND PLAYED THROUGH QUALIFYING TO REACH THE 2ND-ROUND OF A GRAND SLAM FOR THE FIRST TIME. HE WENT ON TO REACH HIS THIRD CAREER ATP CHALLENGER TOUR FINAL AT THE RENNE (RrrEN) OPEN, MADE HIS MAIN-DRAW DEBUT AT ROLAND GARROS, HIS SECOND-ROUND DEBUT AT WIMBLEDON; THEN AS A LUCKY LOSER IN UMAG, CAPTURED HIS FIRST CAREER TOUR-LEVEL TITLE. HE WASN’T DONE PILING-UP THE CAREER-FIRSTS, REMARKABLY – AT THE US OPEN IN NEW YORK – HE EARNED HIS FIRST CAREER WIN OVER A TOP-10 PLAYER, DEFEATING GRIGOR DIMITROV, THEN WORLD #14 DAVID GOFFIN, BECOMING THE YOUNGEST US OPEN QUARTERFINALIST SINCE ANDY RODDICK IN 2001. HE STARTED 2017 RANKED OUTSIDE THE TOP-150, AND ENDED THE YEAR INSIDE THE TOP-40, REACHING THE CHAMPIONSHIP MATCH AT THE NEXT GEN ATP FINALS IN MILAN. COMPETING IN HIS FIRST QATAR EXXONMOBIL OPEN, FROM RUSSIA, PLEASE WELCOME – ANDREY RUBLEV

THIS 34-YEAR-OLD, 3-TIME DAVIS CUP CHAMPION OWNS 7 ATP WORLD TOUR SINGLES TITLES, 7 DOUBLES TITLES, AND HAS BEEN RANKED INSIDE THE TOP-50 FOR A REMARKABLE 14 SUCCESSIVE SEASONS, WITH YEAR-END RANKINGS INSIDE THE TOP-10 IN BOTH 2009 AND 2010. A SEMIFINALIST AT THE 2009 AUSTRALIAN OPEN, HE WAS A SEMIFINALIST HERE IN DOHA LAST YEAR, AND NOW OWNS 488 MATCH VICTORIES. IN 2017, HE REACHED HIS 22ND CAREER SINGLES FINAL IN DUBAI, AND EARNED HIS 23RD AND 24TH TOP-10 WINS OVER WORLD #10 ALEXANDER ZVEREV AT ROLAND GARROS, AND WORLD #6 DOMINIC THIEM AT THE PARIS MASTERS. KNOWN FOR HIS UNRIVALED ENDURANCE AND STAMINA, HE HAS COMPETED IN AN IMPRESSIVE 58 CONSECUTIVE GRAND SLAMS, THE SECOND LONGEST ACTIVE-STREAK ON THE ATP WORLD TOUR. MAKING HIS 6TH APPEARANCE HERE IN DOHA, ON MONDAY HE DEFEATED DUDI SELA TO REACH TONIGHT’S ROUND OF 16 MATCH. FROM SPAIN, PLEASE WELCOME 2017 QATAR EXXONMOBIL OPEN SEMIFINALIST – FERNANDO VERDASCO 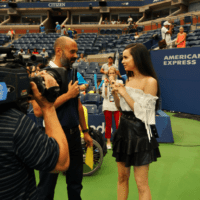