Welcome to Day One of the Qatar Total Open 2014! Play gets underway at 3:30 local time this afternoon at the Khalifa International Tennis and Squash Complex. It will be interesting to see how many of the players perform after an intense Fed Cup weekend across the globe. Eugenie Bouchard and Karin Knapp are in the draw, despite clinching Fed Cup Ties for their countries just hours ago in Montreal and Cleveland. They very well could have to take the court immediately after collecting their luggage at the airport…

With the rain in Seville, the Fed Cup World Group Tie between Spain and Czech Republic continues today – impacting Carla Suarez Navarro, Lucie Safarova and Klara Zakopalova. Other Fed Cup players on their way include:

Tonight, when we start the second match after 5:30, I’ll be bugging-out to host the Players Dinner at the Four Seasons. I hope to have some interesting stories to share tomorrow…and I hope that no one falls asleep in their soup. More tomorrow!

Nadia Petrova, qualifier? She made it through to the main draw, and could score something very special with a win here in Doha: The Diamond Ball trophy…given to a player who wins the event three times. Nadia won the Qatar Total Open title twice in the same year, in two different cities. In 2006, Petrova won the Doha event by defeating France’s Amelie Mauresmo in the final 6-3, 7-5. Three months later, Petrova played in the Berlin, Germany tournament – also the Qatar Total Open (owned by the Qatar Tennis Federation) – and won the title with her 4-6, 6-4, 7-5 win over Justine Henin of Belgium. 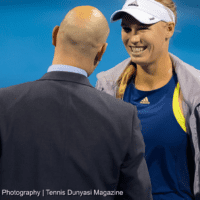