Until Thursday night, the new World #5 Dominic Thiem hadn’t reached a hard-court Semifinal since Acapulco, nearly two years ago. Thursday’s win over Qualifier Stefanos Tsitsipas was an efficient victory, including 33 winners and two timely breaks at the back-end of both sets.

As he has all week, Tsitsipas played tremendous tennis in his second career clash with a top-10 opponent. He defeated David Goffin last year to reach the Antwerp Semifinals. Stefanos’ all-around game is fun to watch, and his eloquence at the net is extraordinary for someone only 19-years-old.

Experience and First Serves Pay off for Thiem

Thiem and Tsitsipas were all-even after the first six games, when Thiem broke first. Impressively, Stefanos refused to fade. Down 3-5, he successfully served to stay in the set. After three punishing rallies, Tsitsipas earned triple break point on the World #5; and two points later, leveled the set. Huge.

The momentum shift was short lived, however. In the next game, Stefanos handed Thiem his second break with a missed overhead at the net. Up 6-5, Thiem serving for the set, the Austrian fell behind 15-40 on a double fault, but endured. Out of nowhere, Dominic’s serve awakened. With two aces at deuce and a Tsitsipas backhand wide, Thiem claimed the first set.

Set-2 featured exceptional tennis. Confidently, Thiem hit his marks and returned with authority. Stefanos continued his week-long all-court artistry, with tremendous control at the net. At 4-all, pressure mounting, experience mattered more than talent. Thiem’s been on both ends of the pressure cooker – most notably his collapse against Juan Martin Del Potro at the 2017 US Open, where Dominic fell in the Round of 16 after comfortably capturing the first two sets. At 4-all, Thiem converted on his second break chance of the set, then served out the match in just under 2-hours.

The 19-year-old Greek has gone on a confidence bender this week in Doha. Before Thursday’s Quarterfinal with Thiem, he won four matches matches, including a complete dissection of former champion Gasquet in the Round of 16:

If he can maintain the level of play he’s displayed this week, the 2017 Next Gen Finals alternate will unquestionably reach the year-end championship again come November, sans the “alternate” label.

Next up: Semifinals. Gael Monfils

By all appearances, Dominic Thiem will begin the new year contending for a title. He hasn’t lost a single match to Monfils in their three previous encounters, including a straight-sets victory last year in the Round of 16 at Indian Wells. That said, the French Wild Card is starving for ultimate success in Doha. Tomorrow will be the 3-time Finalist’s 5th career Qatar ExxonMobil Open Semifinal. At some point, the dam has to break.

AT JUST 24-YEARS-OLD, HE OWNS 8 ATP WORLD TOUR SINGLES TITLES – AND FOR THE FIRST TIME IN HIS CAREER, STARTS THE NEW YEAR AS A TOP-5 PLAYER. LAST SEASON, HE WAS EXTRAORDINARY; ONE OF ONLY TWO PLAYERS TO REACH THE ROUND OF 16 OR GREATER AT ALL FOUR MAJORS. IN JANUARY, HE REACHED THE 4TH ROUND OF THE AUSTRALIAN OPEN; THEN A MONTH LATER, CAPTURED HIS 8TH CAREER TITLE AT THE RIO OPEN. DURING THE CLAY-SWING – HE DEFEATED WORLD #1 ANDY MURRAY TO REACH THE BARCELONA FINAL, AND FOLLOWED THAT UP WITH A FINALIST RUN AT THE MADRID MASTERS. IN ROME, HE DEFEATED WORLD #4 RAFAEL NADAL TO REACH THE SEMIFINALS, THEN POSTED HIS FIRST CAREER VICTORY OVER NOVAK DJOKOVIC TO RETURN TO THE FRENCH OPEN SEMIFINALS. WITH ROUND OF 16 RUNS AT BOTH WIMBLEDON AND THE US OPEN, HE QUALIFIED FOR THE YEAR-END ATP FINALS FOR THE SECOND STRAIGHT YEAR. COMPETING IN HIS SECOND QATAR EXXONMOBIL OPEN, FROM AUSTRIA, PLEASE WELCOME THE #5 PLAYER IN THE WORLD – DOMINIC THIEM

IN A FEARLESS PERFORMANCE LAST NIGHT, THIS 19-YEAR-OLD QUALIFIER UPSET 2013 DOHA CHAMPION RICHARD GASQUET TO REACH TONIGHT’S QUARTERFINAL MATCH. A FORMER JUNIOR WORLD #1, HE HAD A BREAKTHROUGH SEASON LAST YEAR, LEADING THE ATP WORLD TOUR BY QUALIFYING FOR A REMARKABLE EIGHT TOUR-LEVEL EVENTS; INCLUDING ANTWERP – WHERE HE EARNED HIS FIRST CAREER TOP-10 WIN, DEFEATING DAVID GOFFIN TO REACH THE SEMIFINALS. A 4-TIME FINALIST ON THE ATP CHALLENGER TOUR, HE WON HIS FIRST CHALLENGER TITLE LAST YEAR IN GENEVA, MADE HIS GRAND SLAM MAIN-DRAW DEBUTS AT BOTH ROLAND GARROS AND WIMBLEDON, AND QUALIFIED FOR THE NEXT GEN ATP FINALS AS AN ALTERNATE. HE STARTED 2017 RANKED OUSIDE THE TOP-200, AND BY NOVEMBER, CLIMBED TO A CAREER-HIGH RANKING OF #87 IN THE WORLD. COMPETING IN HIS SECOND CAREER TOUR-LEVEL QUARTERFINAL, FROM GREECE, PLEASE WELCOME – STEFANOS TSITSIPAS 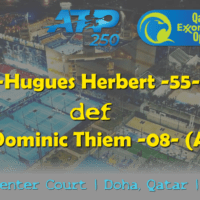