This week, few have been able to outlast the runaway locomotive that is Joel Makin. As legend James Willstrop pointed-out after his 2nd-Round victory, Doha’s frigid and fast conditions favor conditioning and endurance over finesse.

Fueled by his victory just two weeks ago over World #1 Mohamed Elshorbagy, Makin combined that boost in confidence with Doha’s conditions to earn punishing, extended-rally victories (see the road to his first career Platinum Quarterfinal below).

The sneaky Viper has an arsenal of finesse, with conditioning to match. In his first career meeting with the surging burly Welshman, Momen embraced the reality of physically punishing rallies – yet still managed to find his nicks.

After the match, Tarek acknowledged just how difficult it is to play an opponent like Makin. Because of Joel’s size and strength, Momen was forced to work even harder – thankful for those extra hours in the gym.

Tremendous win for Tarek Momen, who gets World #2 Ali Farag in the Semifinals — A rematch of the Weybridge Final 2-weeks-ago where Momen captured his first PSA title in 4-years.

Fantastic week for Joel Makin, who in his Qatar Classic debut, clearly announced his arrival at the top of the game.

He comes into Doha with serious momentum – After going 4-years without lifting a trophy, last week he captured his 5th career PSA title at the St. George’s Hill Classic, winning the title in a thrilling, deciding-game victory over World #2 Ali Farag.

Truth is – He’s enjoyed some of the biggest moments of his career right here in Doha. In 2011, he earned his first career victory over the legend Nick Matthew, upsetting the 2009 Champion in just 3-games. Last year, he did it again en-route to the first Platinum Final of his career. He went on to reach his second Platinum Final at the Tournament of Champions, qualify for the PSA World Tour Finals for the first time in 4-years, and crack the PSA’s top-5, ending the season with a career-high ranking of World #4.

Competing in his 11th Qatar Classic Squash Championship – From Egypt, please welcome 2017 Finalist and the #4 Player in the World – Tarek “The Viper” Momen.

In his Qatar Classic debut, this 23-year-old 2016 Welsh National Champion has become the first man from Wales to reach the Qatar Classic Quarterfinals since Alex Gough in 2005. Unseeded, he’s had to battle to get here – defeating Rex Hedrick, World #6 Miguel Angel Rodriguez and Mathieu Castagnet to reach the Final-8 of a Platinum event for the very first time. And his momentum is real.

13 days ago, he earned the biggest win of his career, upsetting World #1 Mohamed ElShorbagy in 3 tie-break games at the St. George’s Hill Classic. The fact is, he’s been on a roll since May. At the tail end of last season, he captured his 3rd career PSA title at the Tring Open – then opened the new season by winning the Thanet Open title, reaching the Quarterfinals in Shanghai, competing in the final round of the European Club Championship, and earning his first two Platinum main-draw victories of his career at the US Open.

Making his Platinum Quarterfinal debut – From Wales, please welcome the #33 Player in the World – Joel Makin. 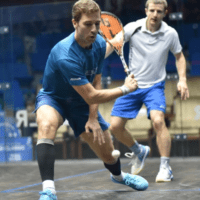 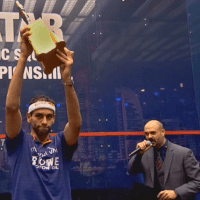 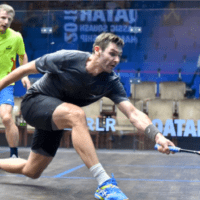 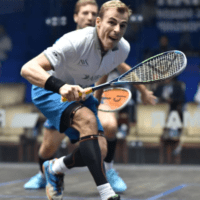 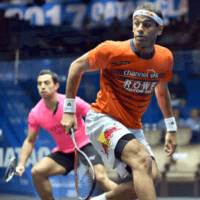