Emcee. Andy Taylor. The Voice of the US Open

What Davis Cup incident? With his Round of 16 run at the US Open, Canadian Denis Shapopvalov has become a tennis rock star. The big moments may have been too much for the 18-year-old to handle, but his aggressive focus and all-or-nothing choices on court captivated fans this week in Arthur Ashe Stadium.

Truth: At just 18-years-old, Denis Shapovalov became the yougest player to reach the US Open Round of 16 since Michael Chang in 1989 (Chang was 17-years-old…and the reigning French Open champion). The baby-faced Canadian kept fans on the edge of their seats in his three matches played on center court. He deconstructed heavy-favorite Jo-Wilfried Tsonga in Round-2. Up 2-sets to one in Round-3, Denis advanced to today’s Round of 16 clash with Pablo Carreno-Busta after 22-year-old Kyle Edmund tweaked his shoulder and cashed it in.

Shapovalov gave himself chances in the 4th-Rounder, but those chances were too tasty. Up a break, serving for the first set, Denis fell behind 0-30, then 15-40. Carreno-Busta finally broke back and stole the set in a breaker (7-2).

In set-2, down a break 4-5, it was Shapovalov’s turn to crank up the heat while Pablo served for the set. He was clutch, smacking fearless forehands to jump ahead 0-40. At 30-40, he crafted his most aristic point of the match, pushing Carreno-Busta back and from side-to-side, then leveling the set with an overhead. Again, it came down to a tiebreak; and again, Pablo handled the pressure with greater poise and precision (7-4).

No surprise, set-3 came down to a tiebreak as well. Again, Denis gave himself flavorful opportunities, but couldn’t make them stick. He broke Pablo in game-two, but gave it up before the second changeover. At 4-all, he pumped himself up by climbing out of a 0-40 hole, winning five consecutive points to remain on serve. But then came the dreaded tiebreak. Pablo leapt ahead 4-0, and earned the win on his 4th match point.

Pablo Carreno Busta and his Temple of Doom

Next up for the Spaniard: [16] Lucas Pouille, who ended Rafael Nadal’s run here last year, or 5’7″ Diego Schwarzman of Argentina, who upset 2014 US Open Champ Marin Cilic in this year’s 3rd-Round.

The reality is, as much attention as Denis Shapovalov has received, Pablo Carreno-Busta is enjoying a hell of a season. He reached his first Grand Slam Quarterfinal back in June with a 5th-set victory over Milos Raonic at Roland Garros. We’ll see if he can score another career-first on Tuesday, and reach his first Major Semifinal. Don’t be surprised should Pablo crack the ATP’s top-10 come September 11th. He has plenty of ammunition. Haas over Federer…and some ‘fire’ and rain 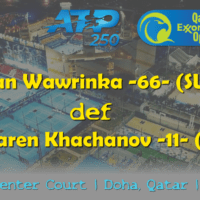