Announcer. Andy Taylor. The Voice of the US Open

She is the most inspiring athlete on court at this year’s US Open. Savagely attacked by a knife wielding intruder during the off-season, Petra Kvitova shredded tendons on her racquet-hand defending herself. After career-saving surgery and months of rehabilitation, she returned to the game in May at Roland Garros. A week later, she won her 20th WTA Singles Title in Birmingham. Poetry.

Kvitova and Garcia have a history

Her 3rd-Round win over Caroline Garcia was quite poetic itself. You see, last year Petra was a force in the 4th quarter. The 2-time Wimbledon Champion earned Olympic Bronze in Rio, won the title in Wuhan, reached the Final in Luxembourg, won Zhuhai, and led the Czech Republic to its third consecutive Fed Cup Final. Though she became a Fed Cup Champion for the 5th-time, the Final left a stain…

Caroline Garcia dominated both Petra Kvitova and World #2 Karolina Pliskova in the singles rubbers. After Petra’s Day-1 loss, Captain Petr Pala replaced Kvitova with Alize Cornet, and it took an heroic doubles performance from Strycova and Pliskova to secure the win.

Petra exacted her revenge on Friday, blasting through the first set in just 26-minutes, blanking her Fed Cup foe 6-0. Garcia spent the entire set-break with her face in a towel.

In the second, Petra went up a break half-way through the set. Two games later, with Garcia serving to keep the match alive, Kvitova earned her first match point with a viciously-angled backhard return, her second with a lightning-fast reaction at the net; yet Caroline hung-on to hold. Kvitova finally won it with an ace.

Petra Kvitova is now in the US Open Round of 16 for the 5th time in her career. She’s only reached the Quarters once, two years ago where she fell to eventual champion Flavia Pennetta. Last year, as the Olympic Bronze Medalist, she fell in the Round of 16 to the eventual champion again. This time, Angelique Kerber. 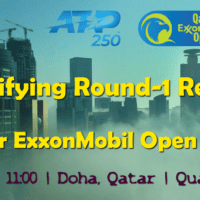