Tennis Announcer. Andy Taylor. The Voice of the US Open

Rojer and Tecau played big in the key moments. Down a break, 3-4 in the first, the pair won three consecutive games, breaking both Marc and Feliciano to steal the set. After the first changeover in the second, they broke Marc again; then held the rest of the way for a straight-sets victory, capturing their second Grand Slam Title together.

After the win, Jules was asked about his shirt, emblazoned with the Statue of Liberty. Here’s what he said:

“…a friend of mine makes these clothes for me to play in. We went with the ‘Lady Liberty’ on the front, and most of my jackets and everything that I have has a peace sign on the back. And really, the idea came after the tragic incident in Charlottesville. We came up with this line promoting peace and freedom and liberty. I’ve been wearing it all around. I have the Lady Liberty jacket, and I have another one that has a bunch of people locked in arms in a Civil Rights march. Yeah – hopefully we’re moving in that direction. I have to say, I’ve been here since I was 12-years-old. It’s a great country. I’m happy that they let me in and that I got to do my job here. So hopefully it will create these opportunities for everybody.”

Both teams deserved the win.

Rojer and Tecau took-out the top-seeds in the Semifinals. Feliciano and Marc eliminated the legendary Bryan Brothers in Bob and Mike’s home Slam. Career achievements on both sides are mind boggling.

[11] Feliciano Lopez and Marc Lopez’s Road to the Final: 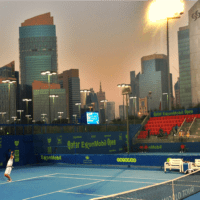