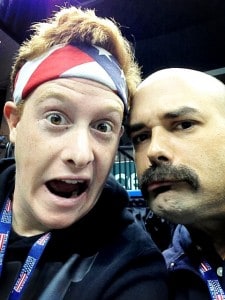 Though he’s undoubtedly a “decibel” competitor for Azarenka and Sharapova, it’s hard not to appreciate the aggressive play of Brazil’s Thiago Alves in Jacksonville on Sunday. He shouldered Brazil’s hopes in the First Round World Group Tie against Sam Querrey of Team USA, and rose to the challenge.

Ranked 135th on the ATP World Tour, Alves battled 20th ranked Querrey from ball-up, taking the first set 6-4. Sam fought back with heavy first serves and overpowering forehands, taking the next two sets 6-3 and 6-4. In the fourth, the pressure of the moment got to Querrey, and he dropped a match point while on serve. Alves eventually forced a tie-break, only to get bested by Querrey 7-3, clinching the Tie for Team USA.

Honestly, after the first day of play, a U.S. win seemed inevitable. On Friday, John Isner easily handled Alves in straight sets, as did Sam Querrey with Thomaz Bellucci. But on Saturday, coming off their 13th Grand Slam title, Bob and Mike Bryan were defeated for a third time by Brazil’s Marcelo Melo and Bruno Soares. It took the Brazilians 5-sets, but they were still in the hunt. 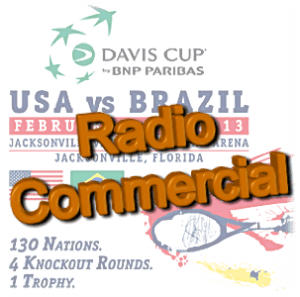 Surely, 16th-ranked Isner would seal the deal versus 35th-ranked Bellucci; but John was also denied in five sets. After easily winning the first set, John lost the second, captured the third in a tie-break, then lost the remaining sets 4-6 and 3-6. John’s reaction after the match: “…just got to break through in a big moment, whether it’s a Davis Cup match, whether it’s a Grand Slam…It’s something I haven’t done. It feels like it’s a huge gorilla on my back or something….It’s wearing on me a bit, to be honest, mentally. It’s very disappointing. It’s something I have to improve.”

It all came down to Querrey and Alves, and Sam delivered the U.S. victory in a decisive fifth rubber. 12-years prior, Pete Sampras was the last American to win a crucial fifth rubber over the Czechs during a Davis Cup Tie in Los Angeles. Captain Jim Courier’s reaction on Sunday: “It was a good effort from everybody, particularly the Brazilians…They deserve a lot of credit for pushing us and making us come up with what we had to at the end.”

Close-call averted, Team USA now faces the most talented team in Davis Cup’s 2013 campaign: Serbia. With players like Novak Djokovic, Viktor Troicki, Nenad Zimonjic and potentially Janko Tipsarevic, the cards are stacked against the Americans — even with home court advantage.

The Quarterfinals take place April 5th through the 7th, scheduled for Boise, Idaho.