The last time Team USA hosted a Davis Cup Tie in Nashville, it was a BIG DEAL

In 1978, Vanderbilt University hosted the Americas-Zone Semifinal between the U.S. and South Africa. After a decade of Civil Rights marches and turbulent conflict over racial inequality in the United States, many Americans and people around the world were incensed the United States would host a nation that embraced the system of apartheid.

In fact, during the 1978 tennis season, several countries refused to participate in Davis Cup competition because of South Africa’s presence. Canada, Mexico, Venezuela and others withdrew in protest. South African Ray Moore withdrew from the team, saying:

I am a South African and I intend to remain one. I neither embrace nor endorse the policy of apartheid. I do resent the interference of politics in the Davis Cup. In particular I wish to play no part in a situation which threatens to turn a sporting event......into a political demonstration.

This was clearly a controversial statement: Neither embracing nor endorsing apartheid. But as we learned 38-years-later in 2016, Mr. Moore is no stranger to controversy.

Political demonstrations dominated the weekend at Vanderbilt University. Fan attendance was decimated. In its Monday recap of Team USA’s 4-1 victory behind Vitas Gerulaitis, Harold Solomon, Fred McNair and Sherwood Stewart – the New York Times wrote: “For the third consecutive day in the series, there were more empty seats than spectators in the 9,000‐seat arena. Only 1,260 persons showed up despite the importance of the final two singles matches.” 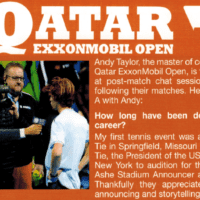